1. Warning call
2. Something’s going to come
3. X is for kisses
4. Launch yourself
5. Love and other planets
6. Crashlander
7. Sea of tranquility
8. You and moon
9. Last transmission from the lost mission
10. These lights are meaningful
11. Spirals
12. Human beings gather ‘round 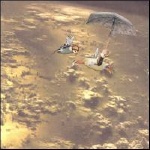 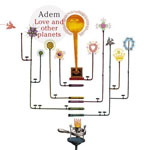 Love and other planets

This lack of capitalization is meaningful. It must be; Adem Ilhan doesn’t deal in subtlety.

His debut solo disc, 2004’s Homesongs, made good on the titular claim, wallowing in tweaked folk about Home, and about one’s indelible pull towards Home, and about whatever it is that makes for a Home. For all the reedy vocals and hushed plainsong refrains, Homesongs is starkly insular. It defined Adem’s world at the hearth, drawing concentric orbits in moments of inertia, mundanity, and untenable longing. I remember thinking, What does make blood thicker than water? Maybe Adem didn’t really know, and maybe that was never something he doubted. With Love and other planets, we have reason to believe he’s being upfront once again, and simply: the album’s about Love, other planets, other universes, and the massive space between. So much more cosmic and vulnerable then his assurances before. Ever so easy, I guess.

For one thing, the singer/songwriter—bassist of Fridge; Love is co-mixed by former bandmate and electronic do-gooder Kieran Hebden — has a voice simultaneously fey, wearied, and afraid. While exercising a new level of control over his vocals, which, before, could have slipped too easily into pastoral folk cliché, Ilhan’s developed a beautiful range of emotion that betrays his monotonous vox melodies and maudlin lyrics. While the preceding may seem a bloated opprobrium (it is), Adem’s sophomore album has its greatest strength in grace, and its most glaring fault in restraint.

Unified by lightly strummed acoustic, stirrings of vibes and chimes, veins of organ and violin, and the slightest touches of electronic edges or unobtrusively filtered voice samples, these twelve tracks carry a thematic concept as unforgiving as Adem’s first record, but are never burdened with experimental effluvia. Instead, the most striking highs and lows of Love occur in Ilhan’s voice, from the battered resolve of “Warning call” to the childishness of “Something’s going to come” or “X is for kisses.” In “These lights are meaningful,” he carries an intoxicating ebullience. Even the cloying and superfluous “Last transmission from the lost mission” is saved from absolute failure by Adem’s prenatal delivery, a fascinating dash between spoken word and lullaby. Gawrsh! that bruised voice, nothing technically honed, everything naturally allowed to separate and find a way back.

And, as Ilhan helmed the production himself, all praise to the artist for knowing how to make sheen anything but irreverent and incipient. Wait, take that back. We can see through the chugging studio wizardry, detect the elegant pacing between ballads and pop stomps and everything between, and Love and other planets wouldn’t succeed without a certain admission of transparency. “Launch yourself” catapults into brisk, thin handclaps and Adem’s floozy tongue-snaps, blatant enough to warrant a chuckle, but his tottering harmonizing, blanketed over a hummingbird xylophone, quickly dwarfs the obvious and places all attention on a brilliantly crafted pop structure. Same goes for “Something’s going to come,” whose euphonic chorus of sylvan “la-dee-dah’s” exploits the shit out of soft-to-loud dynamics, where devout harmonies and apprehensive instrumental clout forge a tight melodic breakdown. Even “You and moon” doesn’t do much at all to demonstrate that Adem’s pushed himself, but the synthetic strings, chocolate and perfectly timed just like “Launch”‘s bass, provides an irresistible symmetry for a snarky beat and irritating vocal sample. It doesn’t hurt that our intrepid artist mashes verse and chorus into one fantastically confident lick.

The kicker with this thing, the harrowing disappointment, is that Adem’s a more than creative and competent musician, cheekily full of uncanny and delicious morsels of ideas, but he’s just too damn precious. With worried couplets and dangling participles, Adem traverses the “firmament,” searching out bonds of Love and Brotherhood deeper than the insignificant travails of anthropomorphic dolts. He’s awed by the stars, cooing, “These lights are meaningful, / We’ve got to understand / And work out what they say.” In “Warning call” we’re hoodwinked into assuming the caveat comes from space, but it actually comes from earth (He is Tyler Durden; Soylent Green is people; they’re all John Cusack)! Then space spelunker Ilhan finds parallels to human relationships in the giant workings of star systems, revealing a kind of romance: “If our galaxy / And Andromeda / …join / At six billion lives per second / And they danced around, / Linking spiral arms… / They couldn’t feel as vast / As I feel now.” His intent is haughty and grand, a macrocosmic counterpoint to Homesongs, but for all the intonations of stardust in the solar system, ALL the juicy hypotheticals awaiting life past earth’s stratosphere, Adem keeps his methods sedate and chthonic. “Love and other planets,” “Crashlander,” “Sea of tranquility,” “Spirals,” and “Human beings gather ‘round” all tread lightly through harmless arpeggios and synth drone, maundering towards black holes. “Last transmission” is even worse. One can’t help but wince when the desire for “You and moon’s” tinny vocal line to be skewed and jostled becomes the primary sentiment for the rest of the album. And…well, that’s about it.

Much of Love and other planets is too accessible to be denounced, and too melodically strong to be ignored. Yet, the pleasantness of the festivities fail to excuse Adem from not imbuing the whole thing with a greater sense of wonder. We already knew he was an accomplished musician, we knew Four Tet could find his way around a mixing board, so then what? Stop yanking my little dipper and give me something to hold my breath for.