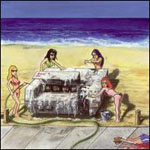 So, I mean, obviously it’s a joke. Four dudes with serious indie pedigree (Hella, Crime in Choir) get together to perform gratuitously faithful math-rock renditions of Nintendo videogame soundtracks. Their song titles leave nothing to the imagination, and their first album cover features a Nintendo flying through outer space. They take two years to release the follow-up to the self-titled debut, and then they coyly call that follow-up Elf-titled. Promotional photos helpfully feature the band dressed as cavemen.

Something is obviously awry with the Advantage, although just how much is awry remains unclear. There are two ways to look at this band. One is an example of pomo reductionism, an absolute debasement of meaning that shrugs in the face of music as art!, smugly offering up videogame soundtracks as their source material. In this light, it’s kinda surprising that nobody thought of all this earlier. Unless you’re one of the dozens that faithfully imported the Chrono Cross soundtrack, chances are good that videogame music isn’t something you’ve ever given a shit about, even if you do play the odd round of Guilty Gear X. By co-opting these NES tunes, the Advantage handily undermines any lofty assertion about what is “good” or “bad” music. In my estimation, postmodernism is about seeing who can scrape the bottom of the barrel first, and if an album like Since I Left You represented musical recontextualization at its most poetic, then the Advantage represents it at its stoopid, artless extreme.

The other way to view the Advantage is as a bunch of giddy, heart-on-sleeve kids, the type that were born pressing red buttons and ended up pressing power chords. Perhaps they were disenchanted by the time Majora’s Mask came out, videogames still, at that point, for little kids; maybe they had cheap vodka and girls to think about it. This makes Elf-titled an exercise in a purer form of nostalgia—not for cheap laughs or intellectual dick-measuring, but for the simple, flighty thrills it produces.

Thrills which, it should be noted, come quick and plenty. The Advantage’s track choice on Elf-Titled shows greater care than on the debut, with about half the tracks but twice the runtime. These were picked not for pure “name-that-tune” yucks but, more rewardingly, for their compositional deftness. Many offer faux-metal gut-punch guffaws: check any of the menacing Castlevania tracks, the throttled pulse of “Guardian Legend- Corridor,” or the hyper-speed spy groove of “Batman—Stage I” (what an underrated game, too, by the way). The band plays these songs with precision and verve, nailing each tremulous crescendo and frantic, salacious bassline. The band doesn’t confine itself, though, loading the opening of “Air Fortress” with terse, melancholy chimes, or letting “Bomberman 2—Wiggy” ride its swaggering licks. Standout “Ducktails—Moonbase” rocks a wistful, bleary-eyed hopefulness, surging upward like Scrooge McDuck bouncing on his cane.

They’re aided immeasurably in these efforts by Spencer Seim’s adroit, immaculately-produced drumming. He maintains a heroic level of fidelity to the music, adding no superfluous embellishments, but provides the power-up that helps the band defeat its own novelty factor. Because, while these games’ original MIDI compositions are recreated aptly by the Advantage’s twin guitar assault, no cartridge had space for a drum track. It’s Seim’s funky, twelve-armed pounding that elevates these from simple artifice, and the frisky snap of his snare is as crucial to the band’s success as the Z-trigger was to the Nintendo 64’s.

In the end, though, it doesn’t matter where the Advantage’s intentions lie, because this is tight, enjoyable math-rock, kitschily cribbed from a source lodged in our collective subconscious. Their devotion to the NES is, yeah, gimmicky, but also appropriate: no other system produced such wild, adventurous music, so spiraling and corny and evil, so indicative of a technology nobody quite knew what to do with yet. Besides, modern videogames are so obsessed with realness that translating their soundtracks would be an exercise in futility. Metal Gear Solid and Halo just mimic the pomposity of Hollywood scores, and Madden and SSX feature two dozen “edgy” pop turds that grow soul-crushing within a week. Elf-titled, like the NES itself, possesses that rarest of all traits: a genuine, punchline-free sense of fun.