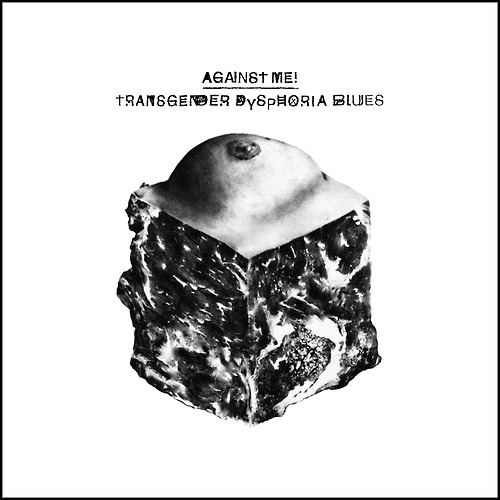 Early in “I Still Love You Julie,” the best song from Against Me!’s scrappily charming debut LP, Reinventing Axl Rose (2002), frontwoman Laura Jane Grace tells of an evening where she “sang along to the songs I never had the courage to write.” Known as Tom Gabel when she sang that line, Grace publicly came out as transgender in 2012, detailing her lifelong struggle with gender dysphoria to Rolling Stone in a moving, candid interview. Against Me!’s latest album, Transgender Dysphoria Blues, deals in large part with Grace’s emotional trials as a transgender woman and in its greatest moments achieves a raw confessionalism almost unmatched in recent pop history. In other words, twelve years after that bit of self-reproach in “I Still Love You Julie,” Laura Jane Grace has written a record of remarkable courage, and she’s singing her heart out all over it.

The record’s eponymous opener, “Transgender Dysphoria Blues,” serves as an overture of sorts for the LP as a whole. It distills the yearning at the album’s core, the loneliness and isolation and bittersweet celebration at hard-won honesty, into a bracing and potent glimpse into an almost unbearable pain. Grace adopts the voice of her worst critics, shouting along with them in their slurs: “You’ve got no cunt in your strut / You’ve got no hips to shake.” She pivots in a breath to her own desires, detailing them in language more heartbreaking for its concision, singing, “You want them to notice / The ragged ends of your summer dress / You want them to see you like they see every other girl / They just see a faggot.” She barks that last word, its ugliness a thick dollop of crude oil on the clean, clear beauty of that summer dress’s well-worn hem.

“Transgender Dysphoria Blues” condenses the album’s compositional approach, as well, spotlighting Grace’s vocals high in the mix, letting the bass carry the nuance of the melody underneath elementally simple guitar, drums pounding away with little room for any frills. Grace’s voice has always been by far the best aspect of any Against Me! track, a forceful tenor with just the right amount of punk grit and pop operatics, and her vocal performance across Blues uniformly pulls her pop-punk songs from their quotidian roots clear up to the rafters. Even when her lyrics flag under the weight a few too many syllables or a leaden metaphor or two, the way she sings them sells the line, nine times out of ten.

As “Transgender Dysphoria Blues” announces right away, Blues—and Grace—are at their best when focusing musically on straightforward, mid-tempo power-pop and lyrically on the album’s titular subject. The “punk” half of Against Me!’s punk-pop label has always been more a matter of ideology than music, anyway—there’s not a dissonant note to be found in all ten songs here. So, a half-baked political screed like “Osama bin Laden as the Crucified Christ” (say it ten times fast, but not if the NSA is listening) feels lifeless next to the perfect, poignant pop of “True Trans Soul Rebel.” The former tries to work out a metaphor where the Mussolini family stands in for bin Laden, while also letting the violent deaths of those historical figures stand in for the fear of violence transgender individuals must live with every day. It’s not that it couldn’t work; it’s just that it doesn’t. “True Trans Soul Rebel,” on the other hand, cuts through that over-determined convolution to express the political as the personal, and vice versa. When Grace sings, of the transgender prostitute character at the heart of the song, “Who’s gonna take you home tonight? / Who’s gonna take you home?”, the simple clarity of the question hits home with a power an intellectualized political allegory never could.

So, if every dud here—“Dead Friend” sounds like an Alkaline Trio b-side, and in this case, that’s not a good thing—ends up being merely skippable, every success proves a home run. Even if you end up trimming the album’s fat, sending boilerplate Fat Wreck stuff like “Unconditional Love” to the butcher block, you’re left with “Fuckmylife666” and “Paralytic States,” gut-punches of deeply felt, anthemic pop more vital than the entire output of ten or twenty Warped Tours. The record churns with fathoms-deep pain and frustration, but Grace never lapses into self-pity—her embrace of herself as a true trans soul rebel rings with well-earned triumph in equal measure. Transgender Dysphoria Blues isn’t a perfect record, but goddamn if it isn’t an important one, and more worthy of your time than ninety-percent of the more fashionable sounds coming out of whatever Bushwick loft party the Times scopes this weekend. Laura Jane Grace found her voice, and she deserves your ears.