1. Dear John 2. King Of The Jailhouse 3. Goodbye Caroline 4. Going Through The Motions 5. I Can’t Get My Head Around It 6. She Really Wants You 7. Video 8. Little Bombs 9. That’s How I Knew This Story Would Break My Heart 10. I Can’t Help You Anymore 11. I Was Thinking I Could Clean Up For Christmas 12. Beautiful 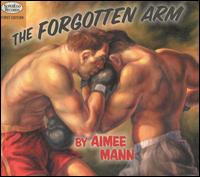 This album should’ve been called The Forgotten Aimee. Despite a string of re-releases and bonus tracks, previous effort Lost In Space never really found a home in my stereo (though curiously, it seemed to do just fine in the Barnes & Noble featured albums rack). Perhaps it was the departure of former partner-in-Magnolia, Jon Brion, who left to produce a still distressingly unreleased Fiona Apple album. At any rate, Ms. Mann hadn’t been on my radar, especially during the current onslaught of double-disc singer-songwriter releases (for the record: Ryan Adams > The Eels > Bright Eyes). The Forgotten Arm is the best kind of pleasant surprise, with Mann singing like she means it on songs worth the effort.

The Forgotten Arm is Mann’s fourth release on her own Superego Records, and with the business network firmly in place, she’s returned her focus to songwriting. With only a few stand-out tracks, Lost In Space was rushed and stale, probably the result of the pressure of marketing her first independent album without an accompanying movie soundtrack and Oscar nomination. Mann has been battling the recording industry for as long as anyone can remember, but her recent achievements have finally given her a comfort zone marked by last year’s live CD/DVD release, Live At St. Ann’s Warehouse. Having proven several times over now that she can make it on her own, Mann is at a crossroads. What’s a successful, satisfied singer-songwriter to do?

“Dear John” opens with the chords of The Who’s “Amazing Journey,” a fitting tribute to the original concept album. Concept album it is, and The Forgotten Arm traces the disjointed love story of characters John and Caroline over twelve songs. If there’s any weakness to the record, it’s found in the crutch of fiction. In a post-From A Basement On The Hill world, made-up junkies aren’t as sad as they used to be, and there’s nothing here with quite the emotional pull of “Save Me” or “Wise Up.” Still, if anyone can make such storytelling work, it’s Mann.

The plot is vague at best, with John and Caroline trading off narrations that only occasionally describe more than a state of mind. When Mann reaches into the meat of the characters, she comes through with gold. “Little Bombs” finds John staring back at his soldier past from his 22nd floor hotel room: “All the sweet green trees of Atlanta burst / Like little bombs / Or little pom-poms.” “I Was Thinking I Could Clean Up For Christmas” is one of the album’s most effective tracks, matching resolutely optimistic lyrics with a melody much jauntier than it has any right to be. This kind of disconnect is where Mann works best, using feather-light melodies and the safety of clichéd rhymes to understate the utter serious of heartbreak and addiction.

Mann’s voice remains sharp and sweet, and songs like “Goodbye Caroline” and “Going Through The Motions” contain some of her most infectious melodies. For all of the album’s heavy content, it might be Mann’s most lushly produced album yet, owing a heavy debt to Joni Mitchell’s Court And Spark and singer/songwriter pop of the '70s. The best songs on The Forgotten Arm reveal the extremes of love and despair under their smiling masks, but the sorrows of the album are tempered by what can only be Mann’s own joy. In the last song, she sings: “All I have to today / Is make you happy.” For once, it sounds like Aimee Man is finally having fun, and that’s something everyone can smile about.