1. Maundy Thursday
2. June Evenings
3. Collapsing At Your Doorstep
4. No Excuses
5. No Way Down
6. Windmill Wedding 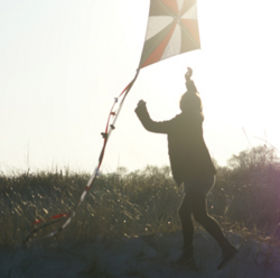 No Way Down EP

It was with a prosecutor’s degree of suspicion that I watched the Air France mp3s hatch one by one on my desktop. Ever the skeptic, I wanted to take a pair of pinking shears to these particular Emperor’s New Clothes, and as soon as the exotic pads of “Maundy Thursday” started to glow, I was convinced it was time to start snipping. Haven’t we already had a water-cooler electronic record developed in the Kalmar Union this year that’s gone on to skim international waters? Could this be the sound of someone riding shotgun in the slipstream? Maybe so, but if Ecovillage’s recent The Quest And That Magic Summer was something ethereal you could use to coax yourself through an acid panic, the No Way Down EP, from fellow countrymen Joel Karlsson and Henrik Markstedt, is something of a flighty prequel, a record to commemorate the apex of the evening where drugs have made you invincible. But this one’s a shade more phantasmagorical than your average all-night dance 7”—on display is the sound of Swedish Summer Party 2008 where foreign CFCs and the Chernobyl hangover have dissolved the Mamma Mia! workprint into something warped and exquisite. I’ve not encountered a pop project that’s made me so eat my words since someone handed me a Carter USM cassette and said, “These are good.”

Not everyone has been caught by the Air France updraft, though, and the “record” is still awaiting a physical release outside of its native Gothenburg. Still, at least the six tracks on No Way Down have the advantage of only requiring a USB stick as a means of transport, weighing in at a little under twenty-three minutes total. Perhaps a gig broadcast from a shiny sliver of plastic is the best way to visualise Air France after all; the image of two blokes hunched behind strobing consoles and flanked by gyrating glamour girls wouldn’t quite do their sound justice. The pulsing strings and pure aura of “No Excuses” make for a Moloko glow just aching to fill the dancefloor, while “June Evenings,” with its chirpy horns and atmospheric Rolands, sounds like Vangelis experimenting with diluted Eurocheese.

And sorry if the namedropping’s getting noxious, but the band’s asking for it: listening to these pieces in sequence even brings about a dramatic reconstruction of the rise of New Order: lasers, guitars, shootings, and melatonin. Which doesn’t mean the band is afraid to salute some of its more risible influences, though. The title track in particular pays homage to a brushed up Bronski Beat, complete with some top-notch impromptu whistling, and the spoken word mantra of “It’s all like a dream, isn’t it / No / Better” on “Collapsing At Your Doorstep” always takes me back to Barney Gumble’s burpy lampoon of “Revolution No. 9.” Never mind the fact that the tune itself feels stolen from the bridge from an M People A-side.

M People, Bronski Beat, Barney Gumble…God help me, I wanted this record to be shit. I’d take in the initial bars of “Windmill Wedding” and think M83 had been trapped in a convex snowglobe; I’d listen again and discover the might of a full orchestra spiced up with a hidden porno soundtrack. Seriously, if there’s one thing on No Way Down that doesn’t at least momentarily hook you, even in the basest, more familiar way, where do your roots go and where do your loyalties lie, eh? Maybe in that sub-dermal nostalgia something about this EP truly resonates, well beyond its frugal runtime.