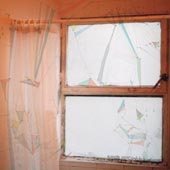 How awful is it that I’m going to compare Venezuelan electro-pop musician Ezequiel “Cheky” Bertho (who goes by Algodón Egipcio, meaning, perhaps inconsequentially, “Egyptian Cotton”) to Spanish electro-pop musician El Guincho? Pretty awful, I think. I’m contributing to the surplus of middle-class, white, English-speaking North American males who attempt, via this problematic medium of independent music criticism, to decipher some specificity from these albums that make their way, without context or background, to our inboxes. How can I provide detail for the reader? How can I write about music, largely incomprehensible to me, like dancing about architecture? The two artists are both Spanish-speaking, but live on opposite ends of the planet. Is there any value at all in the comparison? Deep breath: I’m going to argue yes.

This kind of music—semi-minimalist, atmospheric, occasionally broaching the border between pop and ambient (as Bertho does on “Los Párpados Caídos”), and drenched liberally in delay and reverb—is near ubiquitous. There are plenty of North American equivalents: the Big Pink, Young Marble Giants, Animal Collective, Papa M, maybe a lil’ Interpol, the xx, and, oh, I don’t know, Peter Bjorn and John. Groups of kids approaching their dinner-party years will find much use for this sort of effortlessly listenable music. But it’s not the resemblance to any of these perfectly likeable bands; my best go-to comparison is still another Spanish-speaking electro-pop musician because, like the English-speaking lummox I am, I’m fixating on language here.

Add another assumption to a damnable list: that you, the reader, might also not speak Spanish. So, should self-conscious stereotyping ever be allowed to be put aside (it shouldn’t), I’m acknowledging that what might make this album interesting for my English-speaking readers is the phonetic loveliness of hearing such a beautiful language sung over such beautiful music. The reason why you should listen to La Lucha Constante before listening to, say, whatever next month’s new bedroom dreamgaze project will be, is because it affords the opportunity to consider how much English music depends on rote, nonsensical strings of moodily evocative but otherwise useless language, and how not being able to understand that language would benefit the music in question. Consider the following line from the xx’s single “Crystalised”: “Things have gotten closer to the sun / And I’ve done things in small doses / So don’t think that I’m pushing you away / When you’re the one I’ve kept closest.” There are a number of ways in which these lyrics are terrible, despite the band’s achingly smooth and knowingly stylized delivery. They outright ruin a song I hadn’t felt strongly about one way or another. Now compare it to the following, from Algodón Egipcio’s gorgeous “La Transformación”:

Is it unreasonable for me to say that the context of my uncomprehending listening elevates Bertho’s music euphonically above that of so many cliché North American bands? That not only does he benefit from an inverse relationship between lyrics and music than what I’m interpreting from a band like the xx, but that the inverse can be acknowledged as a reason to seek out the album? Is all of that unfair to Bertho, who went out of his way to write some lyrics that I assume are meaningful to him?

At the not-insignificant risk of exoticizing an actual human being or making him an object of North American materialism, I’m going to suggest that there is a phonoaesthetic superiority to this album, introduced, in part, by the fact that non-Spanish-speaking listeners are forced to consider the arrangement of phonetic components rather than their representational role as language. I’ll stop short of arguing that there is inherent beauty in any one language. But simply put, to not understand what Bertho is saying is to allow oneself access to evocation otherwise clumsily squashed, as evidenced by the xx and their ham-handed attempts at metaphor. I don’t endorse the content of this music (though knowing a little bit of Italian, I can guess at some of the profundity Bertho is attempting with “La Transformación” and “La Condición [La Prueba A]”), but I do suggest that there is value in unilingual listeners exploring the considerable international parameters of their preferred aesthetic, to include those albums performed in other languages in their listening patterns. Bertho utilizes loops, textures, noise, and electronics to beautiful effect, but it’s when those components are combined with his language that this music begins to resemble something with appeal to an English-speaker who, frankly, has heard all of this before.

Of course the same principle can be applied to a Spanish-speaking listener who might appreciate the drawl of the xx’s singers’ delivery and the carefully assembled components of their album, and never know or not care about how bad those lyrics are. This, like all of my reviews, will make no attempt at comprehensive representation. The theory is full of holes already—consider the number of Spanish speakers in North America, for example, and my lazy arrangement of people into geographical locations. But my local, subjective truth—what Rorty called sincere ethnocentrism—puts this very album in front of me and demands that I consider an interpretation of its worth. And so the following banal statement takes on some loaded quality: if you’re like me, you’ll probably love La Lucha Constante.