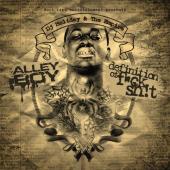 Yup, Definition of Fuck Shit. The components of Alley Boy’s warning shot should be familiar: synth-heavy, often brooding compositions; gun-talk out the wazoo; a 73-minute runtime that includes several throwaway interludes; DJ Holiday talking shit over the first 45 seconds of half the tracks. No other genre puts the listener through this. The day you hear Brian Deck chain-gangling and barking “We world champions…y’all ain’t even in the playoffs!” is the day you notice the vodka you’re sipping is actually absinthe, and Spoon knows enough to put out a tight 38 minutes rather than a Cam’ronian sprawl littered with half-baked pussy tracks and full-baked weed anthems. Outside of rap, only Sufjan pulls shit like this. And I thought Sufjan’s album was really boring.

Yet, here I am, parsing another overstuffed mixtape, sifting for bangers. Fortunately, Definition of Fuck Shit (that title!) doesn’t require too much sifting to enjoy. For a 2010 internet-only product, it’s surprisingly robust, which means it could still probably lose twenty minutes, but most of those 20 minutes are worthwhile enough that the tape doesn’t groan to a halt beneath their weight. Alley Boy’s not a complicated rapper, but he’s good at what he does, assaulting beats with a slick, snarling delivery, stringing together couplets with cocky ease. He’s a good rapper who adorns his verses with the bravado of a great one, polishing off verses with swaggering kiss-offs to would-be haters.

For those who slog through tapes like these looking for singular hits, you’re looking for “Tall,” Alley Boy’s JT-produced collaboration with Young Dro, upon which Dro expresses his admiration for “sushi rims” (“they real raw”) and unleashes a double-time flow that hits listeners’ ears like a silver hammer. It’s one of the best songs of the year, and I would imagine it sounds great blasting out of a car creeping down a major avenue at 3 in the afternoon. Thankfully, Definition carries a bit more meat on its frame. This is due in large part to the variation within the production. Not that you’re going to hear many soul samples or piano keys or orchestral elements, but the beats on Definition fully explore the number of sounds that can be constructed from 808s and compressed instrumental elements. “I’m Strapped” features a lurching, ominous organ, “BIG” is airy and playful, “Alone” shimmers pretty beautifully. Over the course of 73 minutes, ideas are repeated, but Alley Boy elects not to select one sonic conceit and beat it over the listener’s head to the point of monotony.

Not that some of this isn’t gratuitous. Themes are limited to standard gangsta talk: Alley Boy grinds 24/7 and he is very excited to share that with you. Many times over. But this is par for the course with Southern trap-hoppers—you’re going to find the same thing on an OJ Da Juiceman or PRGz project—and it doesn’t do much to impede one’s enjoyment of the record. Where Definition avoids being archetypal is in its consistent quality, not the nature of its content.

What propels the quality of this tape into a different stratosphere from that of much of its brethren is just how hard Alley Boy seems to be working here. He applies his street hustler ethos to his music, attacking each verse with the same alacrity as the last. Where it seems most mixtape rappers simply light up a blunt and say, “fuck it, let’s cut a record,” there’s a blue collar pride apparent in all of Alley Boy’s bars. While other rappers approach music-making like a daily jog, he laces up his trainers and starts sprinting like he’s running away from something. As a result, there’s an adamant bent that positively drips from Definition. In that sense, Alley Boy is like a particularly aspirant street baller at Rucker Park, hoping for the best, putting his head down, and just going as hard as he possibly can.