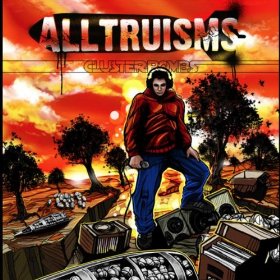 Clusterbombs is a fucking asshole of a record: brash, mean, stupid, good. Like, why drop a line like “We’re hanging up now / Like blacks in trees in the South” besides to raise pulses, like if you were all, “But, guy, I mean—” Alltruisms would blast back, “What? Fucking what? It happened, I can say it! Fuck you!” I have a feeling a lot of conversations he has go like that.

But, like all other music critics ever, I am an asshole too, and so while Alltruisms’ metaphors tend to poke like a stick into my abdomen I knock the stick away and keep listening. You almost want to poke back. He’s relentless: on the most buoyant track here, anti-car anthem “Jalopy,” Alltruisms ignores the bright cartoon-colored sample and yells the chorus all guttural and posse-deep and, for an outro, lashes out at the rest of the rap world like a blind pitbull on a leash. “You need to shut the fuck up about your car because nobody cares! Learn to write lyrics!”

Of course, a lot of this reads like an unpleasant, brutish affair, and in places it strives to be as much, but, remarkably, the net result of listening to Clusterbombs isn’t a queasy sense of self-loathing. Despite a similar methodology to smart-ass feel-bad emcees like Sage Francis or Atmosphere or Saul Williams, when this disc stops spinning the listener is left swept up in the intellectual passion—for art and for, like, other people—that produced the fount of angry lyricism in the first place. Since this is a greenhorn rapper I’ve got the always-demeaning task of comparing him to someone else, “He’s rappers A + B on Drug C,” but fuck that: he comes across like no one so much as David Cross, inhabiting the voices of the idiots he hates because he finds it funny to do so and because he might as well make jokes with all that rage. He aggravates by design, in other words, and he’s really, really good at it.

This is why on “Nine-Digit Number,” the track from which I plucked that toe-stubbing line in the first paragraph, after he lobs enough lyrical grenades to reduce to rubble the political convictions of other forward-thinking emcees, he caps the brutal verse with a stupid diss: “For now we’re allowed to gather / For martial law has been proven less effective than Marshall Mathers.” The entire album rocks this paper-thin juxtaposition between brutal, intelligent sincerity and glib reductionism. By the second track he’s spurted out a line (speaking directly to music) like, “In the eyes of the law, in the eyes of the Lord / I looked in your eyes and found our firstborn’s umbilical cord and recorded it / Haven’t watched it once yet.” By the record’s end this intellectual wavelength has mutated into a line like, “Am I sexist? / Don’t even know / Quoting Joey Ramone / ‘Hey, ho, let’s go!’”

The production, which is uniformly strong, favors wavering synth lines and blurting, stuttered drums, coming at times smooth and sweet (“Oh”) and others bracing (“Hire Me”). This is a bright set of sounds for what amounts to a one-note lyrical performance, if one note played with staggering wit and perversity. It’s rare to find a record both legitimately politically sensitive while still being free ground for retard jokes and endless dick humor, and, indeed, some of my affection for it may come from my familiarity with the sound of assholes complaining about the El and credit ratings and jobs or lack thereof because—well, hello, you know? Still: in a year that’s proven confoundingly productive for underground emceeing, Clusterbombs is a bright addition.