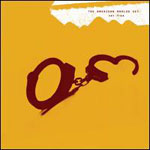 I don’t mean that it’s drastically different from its predecessors—indeed, it’s almost identical to the band’s five previous albums—or that it’s churning out mixtape conversation fodder like so much Wolf Parade. Nay, I’m speaking literally: from front to back, this album’s sound is dominated by a gentle buzz, quiet and ubiquitous, like the hum of an air conditioner from a room away.

The tenacity of this hum is ballsy, to say the least, and it gives each track the same lazy, hazy, blooming blue atmosphere. From this rumbling bass sound, persistent drums emerge, and this rhythm section constitutes a framework upon which acoustic guitars, chimes and whispered vocals work together to build unassuming gems. Opener “Born on the Cusp” sounds identical to Grandaddy, fine, but it’s a lo-fi headnodder of the highest order. The album hits its rumbling peak with “Cool Kids Keep,” which takes the band’s buzzing aesthetic to boom-bap heights utilizing maybe three chords. Andrew Kenny chants a set of mantras about the cool kids, letting all the instruments fade out while he issues his thesis: “The cooler kids will live forever.”

It’s a maxim, a challenge, a prayer and a catchphrase, and it bleeds into the slow-motion flail “She’s Half.” This hymn builds with quiet intensity, “quiet” being the operative word here: the entry of tambourines, ninety seconds in, feels earth-shattering in this context. Then the album hits its moment of minor revelation, Kenny’s voice cracking imperceptibly on the line, “She used to hold my hand,” an echo of heartbreak on an album of studiedly emotionless music.

The juxtaposition of these two tracks is a sequencing masterstroke: an album this singly toned (not monotonous) needs an emotional centerpiece to make early listens more varied. Still, beneath the admittedly identical whispers and drones, there are more highlights to be found, like the looping guitars and loping dignity of “The Green Green Grass,” or the wonderfully titled, “Fuck This . . . I’m Leaving,” which feels for the first three minutes like just an overly slow album closer until it reaches what is perhaps the most gentle Rock Out ever recorded, an electric guitar sleepily headbanging while chimes around it lilt profundities.

Obviously, Set Free’s singularity is also its greatest flaw, and a band that adheres to a formula as strictly as the AmAnSet does to its will never make a masterpiece, despite the fact that every track on this album is good. Very good, in fact, but hinging on a subdued ideology that masks boredom with buzz. Still, it’s hard to fault a band for following its muse to the ends of the earth, especially when the results are as sublimely rewarding as they are on Set Free. The band seems built upon a single rule, one that defies everything we critics hold close, but fuck it: to paraphrase the band, cool sounds keep.