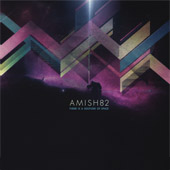 There is a Solitude of Space

If you’re one of the purchasers of Com Truise’s Galactic Melt (2011) left feeling it punched under its weight, here’s three Norwegians to show you exactly how you do an ’80s synthpop revival. It’s not just a question of emulating one decade’s technology—you need to find a successful band, set up cameras and study them, right down to nationality, number of members and sweatbands. It must come as a relief back in Oslo, then, that Jørgen Meyer, Snorre Valen and Bjørn Boassen wrote There is a Solitude of Space only a year after A-Ha disbanded: like their predecessors, Amish 82 have the potential to become Norway’s biggest export, followed possibly by little-known but technically stunning heist film, Nokas. The lasers and attitude on their debut album reach such a level of seduction that even the dicks from The Karate Kid could rock out to them, taking a break from tormenting Ralph Macchio to throw themselves on the mercy of its hooks. It’s all you want from the 1980s, pruned back and tidied for today—the Tron Legacy score, done correctly.

Meyer, Valen and Boassen are sci-fi fans themselves, and take every effort to ensure the production on Solitude of Space is technologically utopian wherever possible. They practise fusion, and pile sharp, chunky keyboards on top of guitar solos worthy of a poodle perm, often three times per song. The electro loops of “Sex Appeal” shows what can happen when they let themselves fully off the leash: synth slabs spiral higher and higher, threaded by a lead guitar that brings its own catsuit. It’s an instrumental—one of five on the record—but still squeals and pounds like medium budget porn, or someone turning the radio up on that TV soap, Falcon Crest. When Valen does sing, Norwegian accent looming, he does so in the style of Cut Copy with their nuts wound tighter. The best demonstration would be on the sunburst of “Hollywood”, and its disco montage of flashy LA. “Lips touch my tongue / I feel like I could conquer the sun,” he shrieks as guitars and drum machines strut. Someone get this man into a white suit and roll up the sleeves, double-quick.

Solitude of Space isn’t just a firework display, though, with instrumentals taking care of the more emotive moments on the album (many of which allude to a time before their parent decade; a time of space films with unhappy endings). For every “Douche Bag” and its mix of Casios and James Bond strings (definitely a homage to The Living Daylights: many Norwegians still haven’t forgiven the price A-Ha paid for their Bond theme), there’s a softer, more misty moment. Literally, like for like: I counted six techno stormers, and six ditties for the dim corner of the party. “Alien Repair Guy”‘s action chords are broken with yearning, sincere strings, which manage to remain sulky even though the track changes pace five times. The slow sonar and downcast throb of “Doorway” is proof a hairspray band can sound contemplative, their film noir orchestra crooning reassuringly. This one does incorporate vocals, though, with Valen proclaiming “I’m taping every moment to be sure” as he recounts a terminal illness.

Despite the neatly balanced scales, the energy on Solitude of Space can’t be measured out, and should stay with you after their forty-minute run. These three ski bums are making the blockbusters, unafraid to add the odd lashing of schmaltz—or even try ideas twice. “Doorway” gets recycled as the punchier “Crocodile”: same chords, same tempo but the album’s first single and ear worm, and a chance for Valen to try some subversively dark vocals (“Stay / Stay a million miles away / Save your love / Build a wall / Dig a ditch around it all / Fill it up / With water and crocodiles”). “Bonnie” brushes closest to 2011 technology, opening with a flurry of glitch beats and pouring in the most beautiful synth tones I’ve heard all year. And the ethereal/ludicrous closer, “End Game,” features music that sounds like Tears For Fears stargazing and vocals that can only be Lionel Riche, taking a break from the crisp commercials that represent a new career high. “We’re witnessing change and things still stay the same” coos the silky-voiced Lothario, accidentally supplying the record’s most prophetic lyric as he fades into a wall of smoke machines. I never thought I’d say this, but I’ll honestly miss him.

If you’ve ever wondered why no one pursued the ’80s-guitar-meets-super-synth direction of the Bill & Ted soundtracks, you’re about to have a deep itch scratched, as Amish 82 have made the retro record of a lifetime. They’ve also thrown in as many of the decade’s treats as they can lay their hands on: seriously, it’s like playing Grand Theft Auto: Vice City with a Trans Am cheat. The past rarely sounds this good, especially when you’re hearing it for the first time. Thank God it’s smart enough to stay out of the politics though. And the sax solos. And the hats.