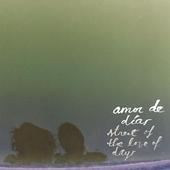 Street of the Love of Days

Sometimes side-projects see a musician enter unexpected, genuinely surprising territory barely hinting at the artist’s prior work, if at all; Amor de Dias is not one of those, though that’s not necessarily a bad thing. Alasdair MacLean, principal singer, songwriter, and guitarist of the much-beloved, now on-hiatus Clientele, and Lupe Núñez-Fernandez, guitarist and singer for Pipas, don’t stray too far from their day jobs in collaboration. Across their debut the duo flirts with bossa nova and spectral English folk influenced by Spanish guitar music, but deals primarily in songs that play like variations on the chamber pop at the heart of the Clientele’s last proper full-length, Bonfires on the Heath (2009).

Over the course of its fifteen songs, the duo often trades lead vocal turns, giving it a somewhat disjointed feel. Núñez-Fernandez often deals in baroque lullabies and delicate pop (opener “Foxes’ Song,” the propulsive “Bunhill Fields,” the whispered “Late Mornings”), while MacLean brings to the table a number of songs that feel at most a few degrees removed from a collection of Clientele B-sides, such as the striking, gently spacious “House of Flint.” He even reworks Bonfires‘ “Harvest Time” into an austere acoustic track, electric guitars and strings replaced by a fingerpicked melody, but even those elements from the original find themselves reintroduced in Amor de Dias’ version as the track progresses, Núñez-Fernandez sounding not unlike Mel Draisey when she chooses to do so, and more than anything incites a strong sense of déjà vu.

Despite being quite well-realized and able to sustain a single mood for so long, the album sounds increasingly like a missed opportunity as it progresses, with the two songwriters’ work almost never achieving a real sense of cohesion. It comes close on the harp-driven “Dream (Dead Hands),” where MacLean plays the support role at the back of an arrangement that steps just enough out of his comfort zone to be noteworthy, and on the pastoral title track, which deals in woodwinds and rhythms he’s almost never touched across his back-catalog. “Birds,” which features both singers, trades horns for a remarkably full, almost entirely acoustic sonic range, and pushes the two musicians at work here into somewhere new. A handful of additional songs that brought the singers’ voices into action together would do wonders, especially since the album’s last songs consist predominantly of shorter, sketch-like pieces.

It’s hard to fault Amor de Dias for their working method, though. Both MacLean and Núñez-Fernandez are strong songwriters simply doing what they know they do well in a new environment, experimenting across familiar ground in ways that I’m sure are major for them even when the finished product doesn’t necessarily sound it. And if the Clientele is decidedly finished, I’m not at all averse to the idea of hearing another Amor de Dias record, especially if this proves to be a springboard from which the two shape and develop a sound that is as truly and uniquely theirs as the work that may have led them to this project in the first place.