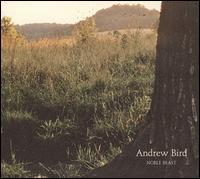 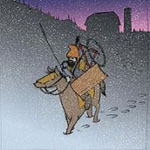 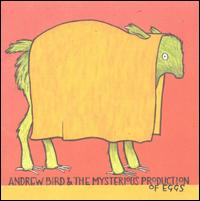 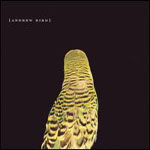 It's time for an admission, CMG readership. I have a very unhealthy way of looking at music critique, and I think that this may be the forum in which I finally purge the vile stuff from its hard-lodged residence in the pit of my stomach. You see, when I review an album I perceive it as a gauntlet thrown down before me by the sneering artist. "Try to sum my shit up in 1,000 words," the artist says. I inhale deeply, stare at a clean white page, and begin to grope, wrist deep, for the clean nougat-y significance of their life's work.

The arrogance inherent in this approach should be immediately evident to all, but to me it is never more forehead-reddening than when I run headfirst into a buoyant miasma like the ones created by folk-jazz-psych-rock-pop aficionado Andrew Bird.

He has always been a puckish songwriter, poking fun at the massive, arcane themes that his music conjured. He grabbed the "Driest Wit" category from Colin Meloy at the indie rock awards (the Indies?) in 2005 when he emphatically assured his audience in "Tables and Chairs" that heaven would be replete with snacks and an adequate seating arrangement. His deadpan humor has the fortunate effect of tempering the disorientation caused by the crashing waves of his music's irreconcilable thematic poles. The playfulness is apparent in the personifications of biological terms that pepper his music. But for every "single cell" that "swings its fist at anything that looks like easy prey" there is a diffuse array of serious implications. The jokes are funny, they are a nod to accessibility, and they can deceive arrogant reviewers into thinking that they have a handle on Bird when in fact their "familiarity" with his work is often a gateway to obtuse reductionism. We're all made up of single cells, and when they "swing their fists" that's called entropy. Still laughing?

Still, the fact that Bird is making the joke is wildly endearing. The fact that he, Poppins-esque, is still offering the spoonful of sugar to make the unpalatable existentialist medicine go down keeps us coming back for more. And it isn't just the wry lyricism that belies the sharp edges of his philosophy: his music has a comforting boundlessness that bleeds vertically from its highest register (the whistle) to its deepest foundations (the drum beats that vary from tight jazz snare to sweaty jungle conga). The appeal of Bird's aesthetic needs no defense because it's not the music that often sticks in peoples' craw -- it's the behemoth that lurks beneath.

Existentialist reckonings are pretty heady stuff for a former swing revivalist, and the tension between the lithe music and the dire ponderings makes Bird's recent work something of a high-wire performance. His lyrics dance back and forth across the tremulous fault line between hard science and soft experientialism. He contrasts cold universal inexorability with the feeling of being alone under a night sky. On "Imitosis," a f reworking of "I" from 2003's Weather Systems, Bird sings, "We are all basically alone / Despite what all the studies have shown / What's mistaken for closeness / Is just a case for mitosis." Then, three tracks later, he gets all Oberst on "Armchairs" with, "I dreamed you were a cosmonaut / In the space between our chairs / And I was a cartographer / Of the tangles in your hair."

This bridged binary is so infused into his new album that even inauspiciously placed lines strain with its tension. "Nooses twist around our necks made of DNA," Bird breathes quietly in a small hollow on "Dark Matter" shortly before asking his spotlight questions in his spotlight chorus: "Do you wonder where the self resides? / Is it in your head or between your sides / and who will be the one who will decide / it's true location."

So yes, readers, I've been bested. My pittance of a review will not begin to encapsulate the depth of Armchair Apocrypha, because, as mutually exclusive as those two lines sound they are both equally touching in their contexts. And even the independent functionality of both bristling edges is not so jarring as when he causes them to converge, makes them harmonize, all the while emanating a credible depth of feeling for both.

Album opener "Fiery Crash" smirks at the concept of death as an event, intoning, "The fiery crash / Is just a formality / Oh, must I explain / It's just a nod to mortality." This theme is a constant on the record: life is hard enough without worrying about death, which is a certainty, so let's all get over it already. "Plasticities" and "Scythian Empire," for example, both examine the ephemeral nature of existence -- they may not sound like it, but they do. In "Plasticities" Bird croons over his trademark pizzicato violin plucks and a snare march, augmented by bells, and, in the oddly rousing chorus, a buzzy electric guitar and hand claps. It would be jagged and poorly paced as a pop song, but in conjunction with the brooding lyrics it falls into a sort of cadence: "You're gonna grow old / You're gonna grow so cold / Bearing signs on the avenue / For your own personal Waterloo."

This, like Mysterious Production of Eggs (2005), is relentlessly idiosyncratic music; that its ninety-degree tempo swerves, breakneck asides, and wonky instrumentation don't pull it apart at the joints is attributable to Bird's aptitude as Master of Ceremonies of his own raucous celebrations. And, to punish that metaphor, every aspect of the party is in perfect line with the others: the decorations match the music, the pinot matches the sharp cheddar. Thus the songs' production and structure work in line with what Bird is attempting with his words. The sonic textures are too effortless, too much a product of his writing voice, too intensely self-possessed with his vision to be the product of creative synthesis; what is going on here is something more singular. It is as if he was served a concise statement of the rules of pop, perused it thoroughly, and decided while politely handing it back that he wasn't interested in pursuing that particular course. This repudiation is not born of any horseshit countercultural posturing, but of a recognition of how temporal and utilitarian that construction can be, and how fascinating is the scope and potential of music outside that narrow band of the spectrum, and how truly few chances an artist gets to make great music in his career.

There is plenty of proof of this perfectionist quality in Bird's discography. Take, for example, the tendency to include retooled versions of tracks from previous albums on his releases. "Imitosis" from Apocrypha is a fleshed out (in both arrangement and theme) reincarnation of Weather Systems' (2003) single-minded "I," just as "Skin Is, My" from Eggs is his second stab at the instrumental "Skin," also from Systems. These aren't remixes or Part II's, but neither are fully re-imagined. This is Bird fine tuning.

It's true that Armchair Apocrypha does not have an answer for "Fake Palindromes," but, it's fair to assume that Bird will be chasing the ghost of that whimsical little scorcher for the rest of his career. He has moved incrementally from the claustrophobic jazz dive fare of Thrills (1998) to this denser and more fully realized song set. True, the step between Apocrypha and Eggs is not as dramatic and defined as some of the others have been (like the step from Oh, The Granduer [1999] to The Swimming Hour [2001], for instance) but the sense of forward momentum presented here makes the progression apparent as it never quite has been before.

So what it boils down to is this: Andrew Bird has thrown down his gauntlet brimming with post-structural imagery, swirling entropy, a truly floral arrangement of genre pieces and genre mixing. He has given generous clues as to his meaning, he has brought his songs together into a more closely congealed whole, he has tied this package with the big red bow of his cynicism and placed it at my feet, smirking. And what do I have to say about it?