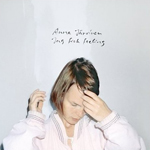 Häpna shooting this stuff down the tube is kind of comical, though I think it’s great that a label known for bands like Tape is willing to whirl their wind vane in such a different direction: pop. Beautiful pop, too assured and fun to follow in the fey footsteps of the kind of non-electro European pop that seems so popular stateside these days, instead preferring to meld orchestral scope to band-driven arrangements in an Emmy Lou Harris rendition of Petula Clark’s “Downtown,” all rollicking guitar patterns sopping up the juices of dripping woodwinds and close-miked acoustic guitars. Produced by Mattias Glava (of Dungen-producing fame) and aided by members of Dungen and a crapload of other musicians, Järvinen eats vague 1970s folk-drama with the same spoon that she’s shoveling contemporary pop-gasms down our gullets.

Though the album is not funny, per se, one of the biggest attractions is how there are several moments where the arrangements subvert classic rock tropes. The whistling on “Nedgangslaten” sounds more “Wings of Change” than “Young Folks,” for example, but the song itself is anything but mawkish, and those subtle vocal accents deep in the mix lend an earned drama that bubbles mysteriously on top of channel-spread pianos and cymbal-washes. That the next track “Leena” also employs whistling to an entirely different affect on top of country-tinged rolling chord progressions and some fantastic drumming is equally funny; the whistles only exist in the first few seconds, like a self-conscious “aww, fuck it.” “Svensktalande Bättre Folk” employs some gorgeous _Sesame Street_-by-way-of-Motown woodwind flourishes which give up the ghost of self-conscious singers like Frank Sinatra and Peggy Lee in the midst of a track that sounds anything but.

Melodies climb and camp their way over the faster tracks: “Vårmelodi” stalls over quick-picking like Nilsson’s “Everybody’s Talking” as dark strings redirect the tonal qualities of the track; “Götgatan” starts the album with a weird sense of “oh—you’re here?” before see-sawing it’s way through a blitz of beautiful moments; “PS, Tjörn” showcases Järvinen’s lovely voice by subtlety adding accent notes and slight chord changes throughout the song. The slower tracks are maybe less exciting, but mid-tempo “Kan du Gå” features emotion-laden vocals that flip on themselves over gorgeous horns and a punctuated 3/4 measure with plenty of swing, “Helsinki” employs yet another “I think I’ve heard this before in a Scott Walker track” piano gush as violins cut through the reverb, and “Kom Hem” closes out the album with a rush of crescendos that end the album on a perfect note: gorgeously.