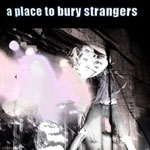 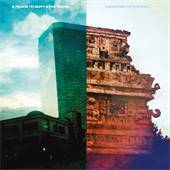 Onwards to the Wall EP

Until recent times, I was stubbornly content to hold myself to the limited understanding that APTBS (and the name’s acronym-ity is infinitely irresistible, which fits; explanation to follow) was a band which, regarding both the group’s and my associations, was a very reasonable one for me to profess to enjoy without having actually ever listened to them for more than, like, thirty seconds or so. This happens with some bands; some are cursed in my memory to forever mark either triumph or tragedy in the annals of my experiments in off-the-cuff bandwagoning assholery, and though it becomes necessary for me to expose myself as an assured charlatan or possible sociopath, I find the particular outcome of each of these ill-advised experiments must have something to offer in the way of insightful critique. Fingers crossed.

Anyway, in regards to why Brooklyn’s A Place to Bury Strangers’ kind of impossible-to-mention-in-casual-conversation moniker is so well-suited to the acronym: it, like the band’s sound itself, hearkens back to a time of convenient codification, a time when barebones, abrasive music and my knowledge of the worlds it inhabited alongside strange sounds of all kinds were something of a golden thread through my small-town labyrinth and the close-minded thinking by which it was necessary for me to convince myself I was surrounded. Though, of course, my hometown wasn’t really all that small. But the relatively basic barriers of understanding presented there were really all that I needed to form a sort of secretive, and thusly independent, identity, and isn’t that the struggle of youth and whatnot.

I guess, in it’s simplest form, the tendency towards codification I’m talking about is essentially the same dynamic that informs why kids of a certain age are probably more prone to liking something that they can reduce to cartoonish jargon, economize in symbol, or embellish with lightning bolts across a note paper margin space. Something about the band’s name alone gave me the twinge of nostalgic instinct enough to know that if I could imagine drawing their name in the form of an evil tree with snakes for roots and bleeding skulls for fruit I’d be better off adding them to a precariously professed list of acceptable interests. But how did things turn out when I finally got around to cranking out some tunage? And am I repentant in any way shape or form for my crimes against casual conversation? There are questions, friends, and there are infinite mysteries.

Oh, before I sort through though, I forgot to mention that A Place to Bury Strangers’ Oliver Ackermann is also pretty well known and respected outside of his composerly attire as one of the virtuoso engineering forces behind Death by Audio effects pedals, and that if you buy pedals you know Death by Audio, and that I buy fucking pedals like it’s my job. This of course may have confidently tipped the scales in favor of Oliver’s crew getting a free pass into my circus of vain aesthetic forgery, but really, it just starts to make clear that A Place to Bury Strangers are a band that don’t leave much to subtlety. What they want folks to know they blow at jet-engine-decibel-range from stacks of amps for as far as the ear can see, and regularly, so maybe in the end it isn’t all that unreasonable for me to have decided that I enjoyed the bruises that those thirty or so gut-pummeling seconds enough to fly the white flag of willing acceptance with little else as evidence. Onwards to the Wall, in the least, spares me from worrying about concocting lame excuses.

Onwards to the Wall shows off that, unlike a lot of their sonic peers, A Place to Bury Strangers have astutely bottled their atmospherics like the scholarly scientists of noise they’ve proven themselves to be, able to dish it out at a moment’s notice without being forced to stretch things into monolithic dirges or force bombast through the tension of crescendo. It’s really viscerally satisfying to be able to swoop in quickly for a sampling of something dense and heavy without the demands of a slow-burner or metal’s attentive complexity, and in that the band manages throughout Onwards to the Wall to keep things just about as industrial as they can get. And without abandoning pop for metal by always maintaining a strict allegiance to simplicity.

Industrialized indie pop and rock melodies and rhythms burst to fill space like air exploding through an airlock, quickly settling into background roles while the electricity the group and their fans know so well lays on without hesitation in quick-descending curtains of steel wool. The resulting magnetic fields that obscure the Ackermann’s barely-there whispers only serve to fully enclose a secret space of densely codified familiarity. I could fault the band here for sometimes seeming to completely abandon melodic or structural exploration and development for the sake of that textural tendency, but blandness only becomes an issue just in time for the EP to end, and considering more songcraft-oriented outings like 2009’s Exploding Head, what they’re doing throughout Onwards seems to fit the form of Onwards in a focused fashion, though without leaving much to the imagination. Or future.

I suppose it’s like if each song on Onwards to the Wall is a mime—just kind of your average combination of tricks and techniques in an annoying invisible box—but Nikola Tesla suddenly steps out from stage left and flips a big switch on a silly-looking machine that puts him in an actual, much less-annoying box made out of purple electrical energy. Voila! Things get pretty interesting. The old is new again.

So, in the end, I feel absolved. APTBS seems like one of those rare bands that don’t deflect surface judgement but simultaneously reward a little personal time. And for a professed bandwagoning asshole guilty of as much cultural mimicry as myself, it’s nice to know that someone back there’s got a handle on the controls to this box when the autopilot goes down. Because I’m definitely not taking responsibility for myself.