Other Records by Aqueduct 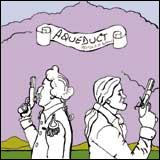 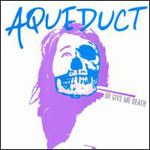 Or Give Me Death

Patrick Henry: “Give me liberty or give me death.”
Vizzini: “Inconceivable!”

Welcome to David Terry’s little revolution: pseudo-sophisticated bedroom indie-pop for post-teen lovers with a deep sense of insecurity and a deep knowledge of popular culture. I’m positing that as a description of Or Give Me Death, but actually it is a goal that the album strives for and, thankfully, does not achieve. Listening to this record is like hearing someone who has some moral fiber describe their first one-night stand. There is seriousness, jubilation, unease, and regret. There is an implicit sense of repression: “This will probably never happen again.” Of course, it can and will (and, I would argue, should). This record is Terry’s attempt at reconciliation, but what he needs to embrace is that he is one great ear-fuck. And no one believes for one second that he wants to die.

On his first Aqueduct project, I Sold Gold (2005), Terry moved through pop hooks like a college kid through ramen. Opening number “The Suggestion Box,” still his best work, is about unrequited love that remains love solely because it is unrequited. The song has a sense of moral superiority, jealousy, and passion that can only be served by 2 perfect minutes of sing-along piano hooks. On this newest release the songs are alternately about pleasure and loss, but never the pleasure of loss that he captures so well on “The Suggestion Box.” He often opts for more serious pieces, which unfortunately fall flat. Death’s opener “Lying in the Bed I’ve Made” is one such song. As if not already weighed down by the revolutionary half-quote, the song begins with an acoustic guitar and dialogue recorded in a moving car; cue, then, arpeggio piano chords and heavy-handed lyrics, and the album starts itself in a hole of self-import that it struggles to get out of. The chorus, musically one of the least memorable on the album, isn’t helped by lines like “Sorry songs / I sing to amuse myself.” I’m not amused.

“Living a Lie,” on the other hand, is practically hilarious. The shout-sung lyrics immediately recall “Bound for the Floor” by 90s faves Local H, accompanied by -- gasp! -- guitars. Terry has broadened the hell out of his sound, adding guitars, horns, and swarms of violins to his usual whirlwind of synths. While the song reaffirms Terry’s ability to write absolutely beautiful and catchy melodies, it also marks a decidedly emo turn in lyricism to match the power chords (“It’s not living a lie / If you’re not living at all”). Still, the playfulness and killer hook (the album’s best) save it from the total oblivion of Monster Ballads like “Unavailable” and “Wasted Energy.”

Of course, this repression of sheer joy can only last so long. Later comes a triad that absolutely makes the album. Sandwiched between camp-tastic Reel Big Fish-aping “Split the Difference" and 8-bit “Zero the Controls,” “As You Wish” is comprised almost entirely of the famed bed-ridden speech of Wesley from the final act of The Princess Bride. As royal trumpets signal it’s arrival, the song becomes a bouncy piano-driven number that recalls elements of doo-wop and Brian Wilson. The backing vocals play an integral role, advancing the plot and delivering the titular phrase. By the time Terry delivers, “By God what is that thing” and the mariachi horns come in, the song has reached a campy, love-struck absurdity that make us all yearn, like a young Fred Savage, for “the kissing parts.”

Barsuk’s web site: “His most melodically complex and lyrically mature release to date.”
Me: “Inconceivable!”