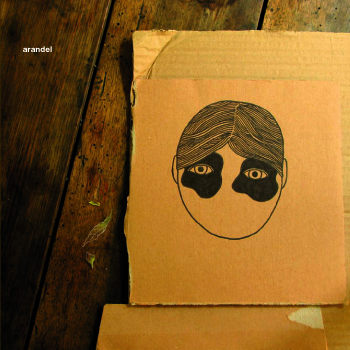 Trying to uncover Arandel’s identity is like tracking the 1933 penny coin—you’re never going to do it unless you’ve got access to mining equipment, gelignite, a sniffer dog, and the world’s most sensitive metal detector. Even scouring the press page for a clue—perhaps hidden in acrostics or a microdot—turns up nothing. Not counting the quote by Dr Sigmund, the Arandel flyer boasts four opening paragraphs, each one describing him/her as a sound dogma/a secret identity/a political commitment/an experimental hub. Hmmm, I thought, thinking it might be a vigilante. I wonder why Batman would release an experimental pop album. And then, Hmmm. I wonder why InFiné Records would act this precious when their career’s been quite warmly established (they’re a four-year-old imprint based out of Lyon with an inbuilt protection against nonsense, so there’s no need for them to go smoke and mirrors). Then it hit me: Arandel really must be Bruce Wayne, and In D is Batman making a record, but a French Batman; one who comes home from tackling muggers to score beats to his muted Euro art films. You can smell the pain au chocolat in the Bat-Cave kitchen. Michael Caine wears slightly tighter trousers.

Instantly stealthy, Arandel’s sound sidesteps both Austrian psychiatrist and French stereotypes to sound almost semi-German, like Booka Shade without hair spray. There aren’t any lyrics (in the world of undercover disco, lyrics = voice stress traceable). There aren’t even any song titles, with the obligatory numbers cleverly jumbled in a dice-dictated order. “#1” is the exception, though, opening the record with cinematic moans that imply a kind of Western—that is until the keyboard tick, trance treble, and gentle puffs of recorder kick in, and you find yourself doing the Dad dance. If you can imagine “Get Innocuous!” adapted by and starring Clint Eastwood, you’ll have the Arandel blueprint half unrolled: synthetic bass over choirs and drum clicks, dub indigestion, zombies. Fans of torchlit electro will go crazy here. This is the closest they’ll get to “Thriller” reboot that doesn’t involve a lookalike winner.

Being French-made, though, In D is no nine “Thriller“s. Arandel/Bruce Wayne has an impressive palette of ideas here, most of which spring from his own imagination if that cryptic press sheet is to be believed (no MIDI, no plugins, no instruments, and the use of only his own instruments). The one thing he has openly borrowed is the title to Terry Riley’s In C (1964), and perhaps a couple of its more do-it-yourself twists, like the stretched metronome of “#8” that invokes bomb diffuser music. I’d love to see the scene in Arandel’s head that suggested this particular piece—the device would be infinitely more complex than the food container/blob of lard/pliers we’re used to seeing on screen. Another chunk of the fifty-one minutes that’ll leave chillers in need of a drink is “#9,” whose looping drum roll, scrambled fax and Godspeed You! Black Emperor-isms spawn a bastard psycho-pop earworm. It pushes the witch doctor vibe to a boisterous high, setting up the moans of people floating to Hell on “#10” rather nicely.

Add in some old sci-fi whooshes and Nick Cave strings and you’ll see In D is a sweetshop of a record, with a few spiked surprises thrown in for anyone who tries to love it first time round. The composer’s talents are a lot less cloudy than his/her identity, and whoever Arandel really is I hope they’ve got more than a side-parting and a pair of glasses to hide behind: if David Lynch ever finds this shit he’ll enslave them, and give Angelo Badalamenti the heave-ho. As In D wraps in gladiatorial horns and the shrieking goodbyes of “Epilogue”, you’d think David Lynch might already be in charge, particularly when Side A was so much more funky (though in fairness only slightly less dark). Whichever way you slice it, Arandel aims for a balance, doing things with landscapes and processed xylophones that only a Morse code conductor could identify. Some of it would stump even Freud himself—hence the press quote, I suppose. “Lie back on the couch,” he’d say from his desk, “And tell me about your parents. The ones who got shot behind Gotham opera house and gave you that unfortunate Dissociative Identity Disorder.”