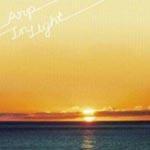 Constructed primarily on various keyboards—no drum machines to be found here— In Light unfolds with a series of synthesizer arpeggios, subtle, tonal shifts, and slowly peaking, hand-filtered drones. These are pure ‘70s; while the retro sounds might cast a slightly dated, analog haze over the tracks (this could have been a Tangerine Dream side project or a lost entry in Eno’s ambient music series) they certainly make for a pleasant and warm buzz, courting passivity but always maintaining a pulse. It’s an interesting tension: it’s unclear what this record strives to be, its compositions confused, stuck somewhere between ad hoc ambient music, a soundtrack to a slowly revealing physical space, and something more gripping, something discernibly more active.

Nonetheless, the blueprint is clear: to establish a track’s presence with a couple of bubbling synths followed by a methodical build of other, more vibrant and increasingly hectic keyboard tones. Arp’s core member Alexis Georgopoulos recorded this live and as a founding (and former) member of San Francisco’s Tussle, it’s unsurprising that Arp relies on similar methods, Tussle’s spiel a steady build of interlocking rhythms and ambient textures. If the basic architecture of In Light‘s songs is unaffected, it is also effective; never a song with too much clutter or too few parts, Georgopoulos’s grace is in keeping a relatively bland palette fresh by adhering faithfully to a simple conceit and then finding an accessible balance between all the splayed-out purposes in each tool he puts to use. That each sound can carry plain electronic tropes (e.g. a glacial coating, machine-like hum, or astral twinkle) and still make a singular space within all the typical confluence of utility-belt pleas for patience is something pretty great.

“Potentialities” is the marquee track, opening with a synth squabble at first filtered so lowly that it comes off like percussion. Additional lines emerge and as the filter slowly opens a drone swells around the edges of the mix. The song peaks once, pulls back, and then peaks again before unwinding into a dreamy exit of fluttering notes. There are several other striking songs: “The Rising Sun,” the most Music for Airports (1978)-esque track here, builds around a plaintive piano figure while “Odyssey (for Baz Jan Ader)” ambitiously sustains itself over an epic sprawl. At fifteen minutes its length is predictable but its stay justified, balancing shimmering keyboard modulations with moments of near-silence. It seems to craft a story both mundane and the stuff of science-fiction: of a futuristic robot day-in-the-life cycle, which means robot gets up for work (the opening grind), then gossip at the factory (the increasing chitter-chatter crackle of the synths), then come home, drink oil, fall into standby (the steady retreat into blanched pockets of silence), then wake up again, repeat (the song’s final noisy ascent).

The fantasy only trails off into oblivion and In Light seems to rejoice in this, decidedly forward-thinking, ambitious, but consistently resigned to the tenets of whatever vague genres—or purposes—to which it aspires. Is this minimal techno? Then the Field can relate to such a plain-faced rejuvenation of tradition. If this is ambient (god help our compartmentalizing) then it’s Music For Subways, stations of frivolity passing by in intense, speckled moments, otherwise limned with quiet, oozing textures. Of course Georgopoulos’s challenge on future records will be to bring new elements into the mix without detuning his knack for balance and the honesty behind his means, but for now the ride is engaging—active—enough.