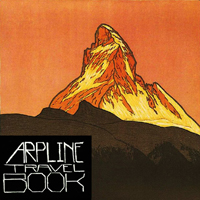 What happens to a band like Muse? Not as in “Where do they go?”, because the answer to that is easy—they usually end up playing for 200,000 people in a former Soviet Bloc country and capitalizing on the UK’s confusing hysteria over the Foo Fighters. No, what I mean is what happens to a band like the band Muse used to be to turn them into the band Muse is now? It turns out to be a short fall from the modest heights of English hype to arena schlock: fantastically popular, and yet somehow universally ridiculed.

New York’s Arpline would do well to employ Muse as their own personal cautionary tale, because they’re treading seriously close—unless being rich and famous but uncool sounds okay, which would be totally understandable. This isn’t a dig at them. Travel Book is quite good in places, a kind of intersection between mid-tempo dance punk and industrial, all stabbing synths and beautiful breakdowns married to busy drums and skittering textures. It’s that undercurrent they have to watch—the one that swells with melodrama and epic thrust. The one that sticks a little ambient interlude on the end of the annoyingly grandiose “Weekend in the Colonies” and follows it with the saccharine “Sound and Versions.” One gets the feeling that if Arpline were living somewhere less trendy than Brooklyn, and weren’t produced and mastered by people involved with acts like Bear in Heaven, Delorean, and TV on the Radio, that they’d be just another band playing out their stadium fantasies at the local sports bar.

But, for now at least, there’s a lot to like. The minute-long intro “Speed (Rush Ah)” sounds like another dance punk sketch until its strategic key change provides the first clue that there’s something more at play. Single “Fold it Like a Piece of Paper” has got a kind of clunky, charming Depeche Mode shuffle to it. Or take the counterintuitive rhythms and the mellifluous bridge of “Parts Unknown,” the two best parts of the best song on the album and certainly a pleasant surprise contrasted with that sweeping chorus. The first few songs draw a tricky line in the sand between knowing aesthetics and clumsy performance, and place Arpline firmly on the side of the former.

And then there are songs that show them sliding to that latter side of the line, the emotional sell job that no one is buying. “Amplify,” “Cap,” silly-spooky “Game,” and especially the six-and-a-half minute “Weekend in the Colonies” tend to overreach, squandering their playful little synth blurts and rhythmic creativity to vamp and whine, and in places treading open-armed and bare chested into sections of unmitigated cheese. (Check the guitar solos and tone on “Weekend,” and the staccato keys that follow; it’s positively Faith No More.) Songs like these keep Arpline from simply being another Passion Pit or Clap Your Hands Say Yeah, that fairly interesting new band with a couple of very catchy songs.

They’re a band worth keeping an eye on, but like Bear in Heaven (or, um, Muse) they seem to be a product of their environment. It just so happens that their environment is responsible for some of the last decade’s most critically lauded and stylistically relevant music. I guess what I’m saying is: guys, you’ve got a good record, and people are going to like it, so whatever you do over the next year DON’T MOVE TO LOS ANGELES.