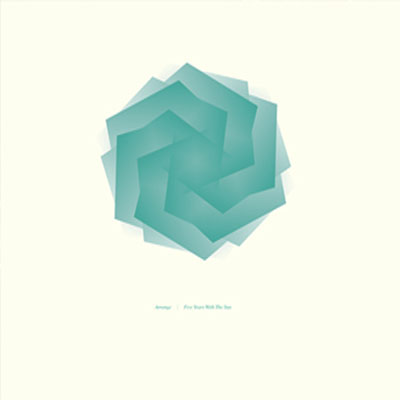 Five Years With the Sun EP

Arrange’s Malcom Lacey, like so many musicians before him who have tapped into the expressive nature of music as an outlet for insecurities, describes the music he makes as a process for the purging of burdensome emotion, a large part of which he says stems from the abuse he suffered at the hands of his father. Those experiences are of such personal magnitude that their influence permeates all creative exercise, and in Lacey’s case, bear a likeness in effect to the oft retold story of Christopher Owens, frontman of Girls. Having developed a lasting bond with Album (2009) and Father, Son, Holy Ghost (2011), I recognize an instant appeal for those artists who ably channel these harmful events into a well from which to creatively draw, but then Arrange is not the same type of heart-on-sleeve, dirty-fingernails-and-all confessional. With Five Years With the Sun, Lacey retains a full control of the oppositional tensions that flow freely beneath, perhaps finally even reaching a point where perspective and empowerment can be possible.

The clue is in the title: the phrase Five Years With the Sun reads as if it were a chronicle of things that have reached a conclusion and can now be reflected upon. The tracks on the EP follow this theme of a recorded journey, a search for purpose that culminates with closing track “Sun Showers”: “I found my north / A truer feeling.” The song reflects this clarity of direction, wherein the fog Lacey shrouds the middle section of this album in is dissipated by guitar and piano, free from the rounded edge that previously lent a sense of mystery to Arrange’s introspection. Whereas the songs on Plantation (2011) largely built unbroken, a rhythmically increasing ache, Five Years With the Sun marks an experimentation with pauses and silence, and immediacy within structural approach. The partial usage of ethereal, swirling aesthetic is not characterized by laziness or an attempt to obfuscate technical deficiency. Instead, Five Years solidifies itself with stiff-backed solemnity, organ tones et al, embedded with a seriousness befitting of its complex subject matter.

Comparisons with artists like Perfume Genius are stylistically applicable, but must surely end there. While both artists share a softly spoken vocal intonation and patient keys to boot, Arrange respectfully sidesteps any inclination he may have had to emulate his influence too closely. There are no songs about smoking weed with teachers on Five Years With the Sun. There is still certain fragility contained within the lyrical framework—he uses a lot of imagery like “my fragile skin” and “the porcelain sea”—but there is fresh resolve standing firm around it. “Cure” (again, the name indicative of a mind set on closure) is a brooding track which features the lines, “Cure / I’ll wait for you / With eyelids open / For what we have to do,” as firm a determination as any Arrange track has ever previously had.

The occasional misstep seems inevitable, given that this has the feel of a record of growth, of transition to wider appeal. “Gone With the Snow,” for instance, harbors percussive flourishes and a solid base, but the leading synth line is obnoxious and cheapens the overall effect, sitting uncomfortably amongst songs with distinct gravity. But these missteps, rather than derail the EP, at the very least remind us that Lacey is still seeking the most appropriate avenues of exploration—and, regardless of where those avenues may eventually lead, the combination of his exponential learning curve (his Bandcamp reveals five releases in merely two years) and the authentic gravitas of his songwriting alone provide reason enough to celebrate his current work, all of it a whispered show of defiance amidst personal strain. The pressure of growing anticipation seems not to bear much weight on the youthful, patient shoulders of an artist who is quietly beginning to blossom, but in the context of Lacey’s emotional resilience, perhaps this need not surprise us.