Other Records by Arthur and Yu 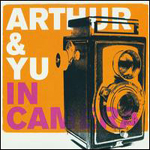 Seattle's own Grant Olsen and Sonya Westcott, together comprising the duo of Arthur & Yu, were made for each other; similarly, regionally and in the vein of the wistful sugar stamping much of their big brother imprint's brethren, they were born to be the flagship release of Sub Pop's Hardly Art subsidiary. Westcott, who used to play bass for Rogue Wave, and Olsen, who at times and in symmetrical intervals resembles Paul Simon, James Mercer, and a bevy of twelve apostle names stretched indelibly through a nauseous canon of surf-folk, have truly found each other. Frankly, the union is pure bliss; Chris & Mollie screech and fight while Arthur & Yu totally jive, crafting mythoi from childhood friendships and dormroom fondling where none probably exist. But there's the problem and there's the solution: in the weight their debut carries -- aided by a noisome veneer of reverb that exhausts most of its tonal and nostalgic possibilities after the third track until, by "Half Years," Westcott's backing moan multiplies and populates the gray space behind chimes and barreling acoustic guitar to pierce the din if only because she's vacuumed the silt from the reverb's mechanistic conceit -- the duo must deal with their influences, childhood, and partially grifted melodies in one swift motion, reducing In Camera to something of a beautiful byproduct.

Which means the album completely glistens, and from the first moments of "Absurd Heroes Manifestos," as ethereal flutes finish a gonged opening, when Olsen and Westcott introduce their give-and-go dynamic amidst verses, ending each other's phrases, weaving harmonies flawlessly before a thunking bass breaks up their flirting, the sensibility of the two seems (seams) nearly effortless. Soon, though, the album slips into formula, which isn't as regrettable a function of momentum as the ceaselessly bouncy tambourines and melodicas, but even for its short running time In Camera loses grace and fumbles into a thick wash of surf and Garfunkel. Ultimately, Arthur & Yu's singing (the moniker adopted from cutesy childhood nicknames) becomes the simple reason to bend over, submit, and love the album, even when whimsy threatens an otherwise wry batch of dirty lyrics like "Just like Virginia / 'Cuz the honey in ya / Is a hornet on the sleeve" from "1000 Words." Credit for flummoxing an expectation or two in dark synth-like chords, but In Camera, when it's not bright and beach-burnt, just can't decide what to be.

Because intentions beg for singles, for merciless suites of orchestration, and all ten cuts inevitably congeal, glooping into one mode. Yeah, moments break from the fog: the jackhammer strumming resting at the fade of "1000 Words"; the inimitable damned-if-that-isn't-a-Trail-of-Dead-line boasting through "There Are Too Many Birds"; the woodblock pounce of "The Ghost of Old Bull Lee." Still, the collection reacts to change like an allergy, refusing to break up a predominant jerky cadence or stomp out insistently juvenile glee. And so what? This has been done before, with the same studio glut, and the band doesn't play ignorant. So what? Even the relentless pleasantries and goofy segues of pop of this masterful caliber can grate, sadly molding cynics out of us all.