Other Records by Asobi Seksu 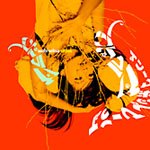 The canonization of Loveless as the apex of shoegaze can be highly misleading; even if many critics can agree that My Bloody Valentine approximately perfected the genre, the pleasure many gain from it varies by some margins. In certain respects, the various reactions to Loveless have to do with the limited appeal of the genre itself, which is a function of admittedly narrow ethic: atmospheric wash, stratospheric guitars, hazy compositions, and distant vocals just can’t activate enthusiasm in some listeners.

Indeed, a listen to Loveless these days can mark it as something of an anachronistic era-piece, and can cement a sense that shoegaze is itself dated by extension. The Wilderness may be most talismanic of that ethic these days, but aside from the occasional left-field promo, few other standard-bearers of the genre march on today. M83, the other act quick to jump to mind, is distinctly neo-shoegaze; guitars outmoded, shoegaze’s hospital bed (or nursing home) must find its defibrillators in the form of synthesizers.

But like the opening washes of Kevin Shields’s soundtrack to Lost in Translation wedded to the images of Bill Murray waking to the wonder of an efflorescent Tokyo, Asobi Seksu accomplish the daunting task of reigniting the magic dormant in that seemingly completed and finished genre. The comparison isn’t appropriate merely vis à vis vocalist Yuki’s alternation between Japanese and English vocals; it’s embodied in the very packaging of Citrus, whose cover of its daydreaming lead singer embracing a scatter of flora is sheathed in an effulgent neon orange case. Open up the booklet, and the somber faces of her group members in blue are enveloped in a psychedelic hurricane of oranges, reds, and greens, and cartoonish Japanese script. Bill Murray approaches Tokyo as displaced outsider and winds up wishing he could stay – a listener might well warily approach the shoegaze of Asobi Seksu as a temporally-displaced curiosity, and wind up wanting to get wrapped up in its psychedelic colors him or herself. New York and Japan crash together in the musical space of the contemplative, and all kinds of endorphin release results.

The epic sweep of Citrus inspires awe by means of different dynamic emphasis. The details aren’t just subtle changes in a lake of noise; they’re now lulls and crashes of guitar waves, occasional crackles of lightning, peals of thunder, a spray of feedback. The subtlety of Loveless can also be its greatest handicap; viscerally, one needs more than meditative movement to be really roused. So in Citrus, sometimes those six-strings absolutely annihilate, some times they snake, sometimes they just drop out completely. But essentially they’re simply tremendous in their variations not only of texture, but of rhythm, of pace, and of density. In particular, the outstanding development, guitar-wise and band-wise, of those last three areas is particularly invaluable to the greater strength of Citrus. Layman’s terms: this stuff doesn’t bleed.

Plus: bass work is once again valuable. Plus: Yuki can fucking sing. Corollary plus: the melodies are at the fore. Sum package: an album balanced in instrumental emphasis, steeped in ethereal singing and tangible substance, and epic in sonic stature.

It opens slowly, innocuously, even, with a brief seventeen second prelude of ambience leading into a fairly traditional opening verse in “Strawberries.” The band quickly pick up the pace, feeding distortion into the methodical 4/4 movements before making a quick transition into a feedback-drenched coda in 8/4 time. From then on the group methodically increase and lessen the intensity of their melodic pushes. “New Years” takes the rug right out from under its guitars and drums to let Yuki toss in some unintelligible and beautiful phrases before resuming with kickdrum and a bass lead.

But it’s after the efficient crash of “New Years,” that Citrus hits full breathtaking stride. “Thursday,” the first of two astounding centerpieces, cycles through a blooming range of guitar textures and techniques, its drumming progressively emphasizing cymbal splashes as it leads the track to its cathartic exclamation point. “Strings” takes the tempo down as contemplation intercedes in the midst of anthemic surges. “Pink Cloud Tracing Paper” (one of only a couple tracks here that may initially smack of throwback) revs into a sustained drum fill that unexpectedly subsides into a meditative verse which will then stomp into a synth-led conclusion.

Then the album’s near-impregnable second half begins. “Red Sea,” writhing in, well, a sea of ascendant guitars, rippling on a prog rhythm, is easily one of the best tracks shoegaze has had to offer in years, stringing together sections that focus alternately on clean melodic progressions, serene atmosphere, and obliterating overdrive without showing a single seam. After its extended thunderstorm of endlessly chorded guitars, the band delivers gold over and over again, exercising a range of compositional skill –importing ‘80s melodramatic pop, ‘90s grunge, and current-decade influences with ease – that absolutely trounces their debut, and any single shoegaze act of the last two years. Tracks spend perfectly measured sets of bars on individual movements before quickly developing new ideas and then assuredly rounding them out. Guitar techniques shift and meld without disjoint or awkwardness. Pace intensifies, subsides, intensifies again. You can pump your fist, or you can sink into your sheets and lose time as the album wills.

I hate mentioning flaws in an album like this precisely because they tend to be of the “this has been done before” cast. So I’ll leave them at, “It’s shoegaze.” But it’s difficult to emphasize precisely how modern and revived this shoegaze is. In terms of its brilliant production, cohesive personality, and compositional ambition, Citrus is a singular vision, the dedication to which is only emphasized by everything from the album’s careful sequencing to its passion to its outrageously good packaging.

So whether or not the individual bits and pieces of this album have been expanded upon, alluded to, or delved into by other acts, the fact remains that only the vague and illusory parallels can be drawn between this and almost any other act, including the ubiquitous MBV. Nearly everything about Citrus is so accomplished, refined, and downright transcendent that it could very well stand alongside Loveless as a modernized shoegaze staple. Don’t overlook it, lest you become one of those old codgers who think that nostalgia for Loveless days still has an excuse.