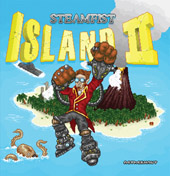 When Team Doyobi tried telling a video game story back in 2003, they fucked up: despite ticking all the right retro-technology boxes, their concept album Choose Your Own Adventure focused solely on just the monsters, which meant 68 minutes of demented fax noises. Colorado snowboarder and newcomer to chiptune Daniel Culp doesn’t want to fall down the same hole, but also doesn’t want to tell an adventure story that has to rely on lyrics. He’s pitching Steam Fist Island II as “an 8-bit concept album that instrumentally tells the story of Wolf, the most awesome steampunk professor ever!” Luckily his enthusiasm runs as deep as the press sheet. SFI2, Culp’s debut, bursts with a love for the golden era of console games—an era where HD meant 256 colors—and lays down his affectations as a series of fast and flighty melodies. It’s a formula that works because it’s even been tweeted by True Chip Till Death, and those dudes hate everything except Ataris.

At a neat half hour, the eleven tracks of SFI2 shoot past like powered-up Megaman. And no sooner have they got moving that it’s soon obvious Culp isn’t playing with true chip here—he’s augmented his work with the next generation of synths, adding enough variety to season. Which doesn’t detract from the chiptune cores of his songwriting, it just means that when you hear a piece like “Title Screen” and its would-be emotional whoosh, the plinking can go that little bit deeper thickened by digital bass.

This foreshadows some later hybrids, such as the dark, rushing menace of “Hydroplane,” arguably the only way chiptune could ever get onto a drum ‘n’ bass night. In isolation the grime chords and drum breaks seem laughable (like anyone on the dubstep scene’s going to admit to completing Treasure Island Dizzy), but working alongside the blips they produce a first: chiptune goosebumps. This is the classic adventure Culp’s promised us since the start, though it does sound slightly like “What Goes Around…Comes Around” by Justin Timberlake.

Tempting as Timberlake’s production secrets are, Culp isn’t afraid to hop out of the shadows and occasionally play with just the Game Boy, nothing else. The several “uncontaminated” tracks on SFI2 recall the likes of Super Mario Land, often so perfectly it’ll have you looking up game emulators. Like I did. Culp’s story, which traces the fictitious Professor Wolf, has a tight plot to follow in only half an hour, so you have to be feeling nimble to follow it. “On the Airship”‘s funk riff is a calculator discovering dubstep, while “Field Map” soars into action like a flock of synchronized Nintendos, darting merrily as it builds to its chorus. (These tunes have choruses, by the way—they’re not just coordinated stabs at the joypad.) You can picture the invincible Wolf blasting through levels, tackling the octopus, then the U-boat, then the black volcano of the cover art. You can also imagine dying at the same stage each time, missing out on puberty as you keep hitting Continue.

Fortunately, Culp keeps his game balanced throughout, and makes sure Steam Fist Island II becomes a rip-roaring little concept album. I haven’t seen this much enthusiasm on one record since the Ned’s Atomic Dustbin debut, and while Culp might not have the advantage of two bassists/a band that performs only in surf shorts, he does know just when to turn up the orchestrals and give his ideas a boost. Passers-by might even think the chiptune genre’s too narrow for him; with an inexhaustible catalogue of pom-pom beats like he has, he could easily get a piece of the ringtone industry. At the very least he should be talking to a professional app developer, because the adventures of a robo-suited professor who goes gamboling his way around an island could rival Ducks, seriously. Aethernaut’s soundtrack, based on this record, isn’t far behind it. Don’t listen in the car as it’ll give you get lead-foot, and don’t listen if you’re expecting blip-bass assaults like those dished out by Toddla T. But do put on Steam Fist Island II if you want zaps, tunes, and treachery, and if you’re seriously tempted by those retro Commodore keyboards.