1. It Came From the Cellar
2. Makeshift Instruments
3. August Griffith
4. First Round Draft Pick
5. Crying Out (The Ballad of Johnny Nobody)
6. Vitriolic
7. Industrial Matters
8. Party In A Box
9. The Numbers Game
10. Story To Tell
11. Reflections Of A Sunset 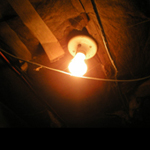 Here at the Glow, we're pretty self-referential. This approach can get difficult when the whole point of what we’re doing gets stuck in simply emphasizing the emphasis of a “viewpoint” from a person who knows his or her voice is rarely heard. Think of, maybe, a creative writing class where everyone has to criticize a girl’s story, and that story happens to be about a rape, which, the girl admits, is about as true a story as she can manage. How can anyone tear down the bravery in telling that, piecing apart the embarrassment and trauma and everything else that comes with an event that very few of us can imagine? The distance between admiring a confessional, bare bones song or story or whatever and analyzing the actual craft becomes something of a moral space.

Now, this right here is August: harbinger of Basement Troubadour Records, a producer/emcee that makes up one half of the Synergy duo with Kurram, and sole fronter of the debut LP, The Cellar, a chronicle of “the world of the loner-who-may-have-something-interesting-to-say guy.” August defines his underground persona and then some; a dusty deck of bass plumbing, cut by brass and clipped percussion, serves a watery and eager bed for lyrics about CD-Rs and indie cred. The man’s flow is clever, a smoker’s voice washed by acrobatic internal rhyme, and a lot of his vocal effort is in the struggle he maintains to match the smooth push-and-pull of his beats without lapsing into frantic and tiny couplets. Anyway, this is exactly what he ends up doing, creating a terse scramble that mimics water colliding into a clog in the rusted pipe above his head.

The beats, sure, are proficient and porous. “Crying Out” lays a processed steel drum afraid of its own shadow against pawed bass and a drill press. The vibes on “Story To Tell” add a furrowed brow to an already uneasy story (although the cheap R. Kelly drum loop seems to mock the song’s content) as does “It Came From the Cellar’s” swampy synth. “Party in a Box’s” snare is nothing to stop and think about, but the squirrelly sax and trombone bytes dredge up, hmm… a Box Social.

Too bad the track opens up to one of the problems with The Cellar: namely, August’s scratching. In “Cellar,” in “Makeshift Instrument’s” intro, in “Party In A Box,” and even in the sappy “Reflections Of A Sunset,” August takes to the tables simply, crisply and restrained. The only thing that limits the guy more than a dedication to repetition is that his scratching lacks zeal or even any personality; high-pitched and grinning, even on the darkest tracks, the records wear out to big-“B” Boring. Then, problem #2. Even with a solid flow, August finds ways to trip over his own words, as in the chorus to “Vitriolic,” which seems a mouthful too many for the ghostly Dizzee Rascal beat. Inevitably, many of August’s beats sound thin, marred by rushed, chunky lyrics that keep the arrangements, let alone the emcee, from breathing.

Which leaves us with #3: the heft of August’s thematic balls shrink behind endless bitching. Being a basement emcee/producer/businessman/webmaster/labelmate/designer is infuriating, often unrewarding work, or so it seems in lines like, “Doesn’t get any better / Need a fucking wool sweater / Always short on fucking cheddar / Sending out promo letters / Still turning broken knobs / Sitting fighting stomach throbs / Smoking fogs, toilet clogs / Smelling shit from fucking dogs,” and then, admittingly, “Back to my fucking bitching.” Regardless, lyrically, “Crying Out” is sloppy and unfocused, “Reflections Of A Sunset” is too dainty to make a mark, and the rest stinks of martyrdom. It’s sad that he relies so often on “fucking” to keep the beat. It’s funny, too, that the most masturbatory track on the album, the spoken word “Industrial Matters," backed by a strange dialing noise, ends with the line heaved at a rhetorical executive: “Goodnight, and have a wonderful time playing with yourself.”

There are lists of the harrowing exigencies of being a producer of August’s caliber, but the listener won't understand why. His explanations and regrets are just raw accounts, and because they don’t go much deeper than that, all the whining and pouting remain stuck in the basement. It’s even more difficult to see August creating the persona of the “bitching DIY guy” for his debut when so much of Basement Troubadour carries the same mystique. So, most of August’s self-referentiality loses its point; when the listener is actually lead out of the basement, as in “Crying Out,” the universals of a misunderstood teen just sound cliché, rushed and empty. This is the album’s biggest flaw: presuming the audience wants to listen to the same complaints over and over because they’ll be able to “relate.” I can say that I don’t want to listen, that I can relate in some ways, but The Cellar only seems like a beginning. When an image thwarts an otherwise complicated and skilled artist, the reality of it all doesn’t much matter anymore. And, back to our bitching.