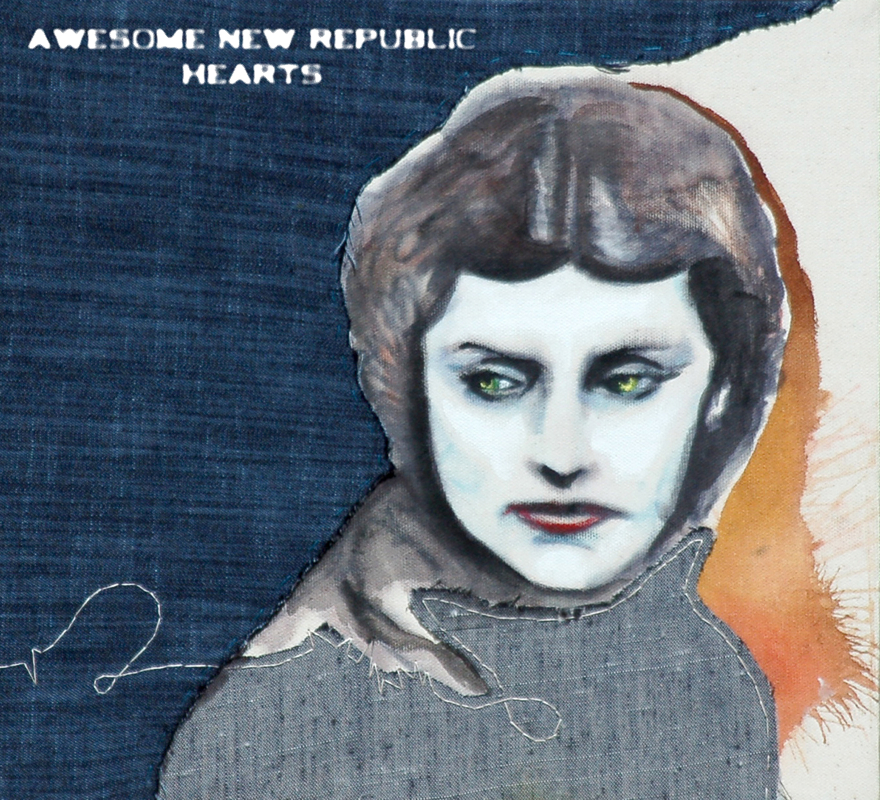 Just in time for 2009: a certifiable sequel to In Ghost Colours (2008) and, amazingly, one not from France! My knowledge of the Miami music scene might have crumpled with the premature death of Merck Records, but I’ll certainly become a born-again subscriber thanks to this sophomore from Awesome New Republic. Michael John Hancock and Brian Robertson—MJ and B-Rob to their mailing list—are the first duo of synth-smitten late-twenties males to carry the torch from Cut Copy this year, picking up from where the Australians left off sometime in May 2008 with their sun-drenched dance crossover. Hearts, however, maybe goes a yard or two further than its mentor by upping the ante with its lyrics, most of which take textbook indie confessions and mix them in a cocktail shaker. Luckily, like all good proprietors, Hancock’s a born showman, and not the kind to distract with waistcoats and smoke while his assistants stick keys under his fingernails. This is honest, open pop music—openly cheerful, openly hyperactive, secretly sad, and openly outrageous (partially). How could you not fall in love with a record whose first four songs forms a concept EP, or one that can boast a waltz to positivity disguised as an ode to bashed pushbikes? Exactly. Let me explain.

The key ingredients on Hearts are crucial: an almost never-ending source of dazzle and enough Californianisms to power The OC. OK, so it may statistically be harder to put a foot wrong when your run time’s just 36 minutes, but hey, who’s to sneer at a little safety? Plus, the Republicans by their very nature are seldom uninteresting, as any British Northern Ireland veteran will tell you. “Whatever,” with its tales of illicit trips to the border to square off with dubious contacts, could almost be a very sloppy salute to the Troubles themselves, but then it’s not often you’ll see a bona fide war song made of neon falsetto and dub sleaze. Here, Hancock kicks off his four-song novella with the sheepishness involved in drug comedowns, relaying the time he tried to liberate his unbroken partner by offering her love as an alternative to cocaine: “Why don’t you meet someone at the border / Who gives you something brand new to take / Why don’t you realise that what is real here / Is fake.” He and B-Rob follow this up with “Dances When”‘s sparkly plinking; it’s all disheveled shuffling and keyboard flashes as Mrs. Cokehead flops back into relapse. It’s more ruthless and ’80s than the Karate Kid OST (1984) and it even comes primed with loner guitars and Casio lockdowns to let you slip into different corners of the disco.

But the story doesn’t stop there—it hardly even starts there. “Alleycat,” already touted across blogs as a lead track/worthwhile single, is the strongest cut on the record and pits the star-crossed drug-dreamers against one another in a blazing catfight that ends with MJ the councilor needing stitches. It’d be tragic if it didn’t tap so funkily into the paranoia one experiences during the death rattle of a relationship, the kind that has you imagining men hammering on roofs are calling you a paranoid little weirdo. In Morse code. “It’s not just something in the water here,” harmonises Hancock as his girlfriend beats the living shit out of him, leaving him to crawl off for “Birthday.” Its mutant noodling turns camp eight bars in, but, judging by its wailing and hi-NRG synths, the party boy still gets the bumps. A suitably Pyrrhic conclusion to Hearts part one, then, and you’re not even halfway through.

It would be easy to detail the other scores of licks on the album—the low-key jazz via dejected church organs on “Footstomp Decay”; the hopeful breath of “Dark Water” (nothing to do with the so-so Jennifer Connelly flick); “Wheels No Engines”‘s aforesaid chronicling of how the right chords and chiming can make your bike work. I could go into a lot, in fact, as these eleven tracks aim to be as fun-packed as a package holiday with good weather. The frequent touches of Hot Chip’s cheekiness and the masculine pouting of the Pet Shop Boys give a professional/profitable edge, but those allusions also mean this isn’t a record for the deeply self-conscious. That’s when the might of something like the title track hits you and fixes any issues you have with seriousness. Hancock and Robertson’s spine-tingling anthems raise the roof whenever they can, but occasionally they prefer to peel it back slowly and let you take in the stars without prancing. Then they’ll whip the rug out entirely from under you and descend into porn for two songs (find them on the track listing—it’s easy). It’s these smartly-developed teenage reflexes that sustain the everyman factor and help raise Hearts to the top of its genre where the word-of-mouth viral can multiply. It deserves to, really; despite its more flamboyant touches it’s still a pop record with which to close off the decade. I don’t know who’ll follow it come 2010, but it’ll have to be someone with serious ambition. A duo of synth-smitten late-twenties males with a live drummer/violinist, maybe.