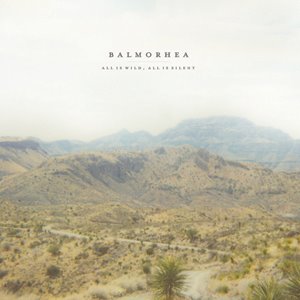 All Is Wild, All Is Silent

Consider this a companion piece to my review of Anathallo’s post-emo gush named Floating World (2006). Like those heart-on-sleeve Thumpers, Balmorhea do just enough quivering of their lower lip and batting of big dopey eyes that we feel bad about blowing them out the airlock into the dead void of space. Looking back, my review of Anathallo was too ensorcelled with that group’s musical dexterity, their supposed bravery in the face of the big bad cynics. Turns out it was the combined rating, a good ten percent lower than my own, that was spot-on. No making that mistake again: All Is Wild, All Is Silent is a sugary emo hangover smothered in an apologist’s emphasis on performance and technicality, like Efterklang rendered in syrupy Technicolor rather than their crisp, digital perfection. Balmorhea are a band so earnest it’s hard to admit that their music gives you a stomachache.

All of the touchstones are right there in opener “Settler,” six and a half minutes of musical tourism complete with handclaps, rolling piano, and acoustic guitar as foregrounded as possible. Each element spins heedlessly out from the same insistence, an assumption that instrumentalism must originate from an inescapable black hole of melodrama. Hard to deny that “Harm and Boon” is some catchy shit, ended with an even nicer departure into world-weary swing and sway, but it’s also as romantic as that other decent 2009 instrumental record, Chemtrail’s Terminals, is post-apocalyptic. The emotional bent of the record is inscribed on its face, as obvious as a Bond villain’s disability and ultimately as shallow.

All of which makes it harder not to preface this review with a caveat. I mean, this is Balmorhea’s third album of quietude and ruralism, and all of it is equally lovely, effortlessly performed, well-produced, and comfortably paced—that in itself is a bit of a reduction of both the band’s formula and intention. But then it’s hard not to focus on the two minutes of “Elegy,” a pleasant but completely unnecessary acoustic idea that’s plucked out with such methodical intention to border on plodding. “Elegy,” like so much of All Is Wild, All Is Silent, is a sketch that knows not where to build and seems uninterested in exploring the borders of its possible compositions and permutations.

Or take “Remembrance,” which has charitably been compared to Morricone. The comparison is clumsy but interesting in that Morricone’s body of work suggests where Balmorhea surely have the technical skill, if not the vision, to go. But Morricone is a master because he understands expansion and pacing, the narrative heft of instrumental music made possible by the lack of lyrical exposition. Each of his gradually developed themes either provides an eventual payoff or subverts one. “Remembrance” certainly does evoke Morricone’s occasional pastoralism, but with none of the sinister undertones which he so effectively veins throughout. Put more succinctly, the title All Is Wild, All Is Silent is only ever half-right.

No song better accompanies this summation than the eye-rollingly titled “Truth,” which wastes almost seven minutes building to its recital piano chords. The principle and thematics are heavy-handed and starry-eyed, but I’m again brought back to the notion that Balmorhea sound like such a sincere and gosh-darned talented group of kids that a review like this can only seem callous and unfeeling. Are we not all born from that same well of emotion from which this music simultaneously springs and acts as soundtrack? Are we not curled in the embrace of our mutual affectations, contacting our own and each other’s inner child-like wonder, if only we are brave enough? The answer, of course, is no, and I know because more complex and challenging bands than Balmorhea helped teach me that.