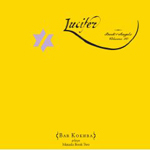 I’ll admit the idea of John Zorn scribbling full notations on staff paper or tapping the music stand with his conductor’s wand isn’t exactly my most personally-revered image of the ineradicable genius. Still, that’s kind of what makes Zorn great: he never, even in the days of Naked City, fully embraced the chaos and violence of improvisation. He merely toyed with it, cementing the paradox of “structured improvisation” in a way few artists have before or since. The biggest thing missing on albums like Lucifer: Book of Angels Vol. 10, besides Zorn’s own instrumentation, which he sheds in favour of a full-on composer/conductor position, is the sense of completely thwarted expectation found on his edgier albums, which shift from romantic balladry to full-on torture porn. Still, if you consider that this structural approach owes more to film and television music than jazz per se—further evidenced by his numerous Film Works albums, his intial breakthrough with an album of Ennio Morricone covers (1984’s The Big Gundown), his awesome takes on the Batman and James Bond themes, etc.—then his forays into Jewish chamber music kind of make sense. The shock is gone, but the suggestion of lurid romance, of violence, and of movement is still there.

The morphology of Zorn’s numerous projects can be confusing, which may be why he’s chosen to organize many of the releases on his own well-established Tzadik label in series like Book of Angels, which finds various artists interpreting songs from Zorn’s own Masada Songbook, the main source of his Jewish chamber orchestrations. The idea started with the band Masada, an avant-garde jazz combo that took Jewish music as its basis but ultimately sound like a harder-hitting Ornette Coleman. The Bar Kokhba name first arose as the title to a 1996 Zorn album, which found him fully embracing his roots by adapting his Masada work into various chamber ensembles and zeroing in on the culturally-specific origins of the original music itself. The name was first used in the context of the current line-up (drums, percussion, guitar, violin, cello, bass) with his 1998 release The Circle Maker, with the sextet playing half of the two-disc set.

Lucifer is the first Bar Kokhba studio recording since The Circle Maker. Rather than simply deliver the orchestrations straight-up the band opts to improvise within a tightly-arranged framework, which makes the improvised moments seem explosive. The nearly eight-minute “Zechriel” might sound tedious on paper, as its bass-led motif is repeated throughout, but with Marc Ribot’s electric guitar mapping out delicate tremolo drones and surf licks, the riff seems to give the players an incredible amount of freedom. Ribot might be the strongest element of the sextet, if only because he seems to be the driving force that keeps the group from being too bogged down in tradition, embracing similar world music/soundtrack tropes that Ennio Morricone and Bill Frisell have previously mined.

Still, he’s not the only one: the two percussionists, Joey Baron (who also backed the thirty-second thrash/speed metal workouts on the Naked City albums, which gives you a good idea of just how far from tradition these players are) and Cyro Baptista mix delicate cymbal-tapping, brushing over snares, and keeping time on wood blocks with far more diverse rhythmic flourishes. Like the rest of the band they seem primarily concerned with how far they can stretch the measured tempo and rhythm of Jewish music without losing the central melodies. While the shakers and slow, quiet cymbal crashes on ballads like “Quelamia” give the tracks a beautiful kind of intimacy, it’s equally impressive when they let loose: “Gediel” takes the post-bop playing-around-the-notes style of Philly Joe Jones and adds some furious palm-bleeding hand percussion.

And throughout there’s that distinct Zornian element: that sense of overblown romance, giddy cinematic perversion, and decadence that marks all of his records. Jewish chamber music has always paradoxically been invested in both intense mourning and longing, as well as unbridled celebration, and Zorn seems to understand this. The dark minor-key melody of closer “Abdiel,” initially played in sync by all the instruments, is offset by the occasionally-joyous bursts of Mark Feldman’s violin. To say that Zorn or any of the musicians wallow in the drama of the music might be shallow, so perhaps it’s more accurate to say that they manage to hermetically link this sorrow and violence with passion and romance.