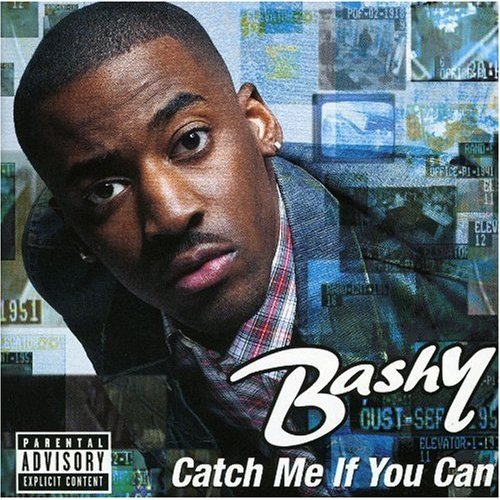 Catch Me If You Can

Only once before have I taken the plunge in buying an album based on one soundtrack contribution: The Boy With the Arab Strap by Belle & Sebastian. That was some ten years ago, and I learnt then how eight mildly effeminate Scottish Christians could turn in a decent little indie LP. Having fished around the grime scene since that start of the year and after catching Adulthood on Blu-Ray last month, I thought I’d play a similar card with “Kidulthood 2 Adulthood,” the theme for the movie as recorded by Bashy, who also helped exec-produce the score. Young Ashley Thomas has been amassing hype for over three years now, ever since he rattled cages with his Chupa Chups mixtapes and ducked out to work as a bus driver. His fans and fellow MCs have been marking time since, finally getting the reward they’ve been angling for when he dropped his debut album last month. Slightly over an hour of colourful carpe diem, Catch Me If You Can comes more hotly tipped than Satan’s soldering iron, and looks set to provide that lucrative grime crossover should the kids take a shine to it this summer.

That shouldn’t be too tough, really, as Bashy’s a hard bloke not to fall in with during this powerful but strangely-paved setlist. It’s not hype driving the album but diligence: Bashy and his collaborators have put the hours into this one, lining its core with an array of routines to hook any curious pedestrians. Catch Me If You Can‘s seventeen-pronged attack is a conscientious portal into newcomer grime—for every rise to celebrity via plush R&B licks, there’s a heap of busted jungle break the consumerism freefall. “She’s a Gangsta,” for instance, is practically Lily Allen without the marketing, a computerized ode to a club murderess and “Not just some pretty young thing in a dress,” as Bashy himself puts it. It tells the story of some evil diva with a nasty personal space issue, strapped and ready to put a bullet through the first head that tries to come and fuck with her. This flicker of controversy adds spice to the machines and Thomas’s chirpy drawl will easily win you over if you take the time to properly listen (see also the disco salute to the art of flirtation on “Your Wish Is My Command”).

Real grit is never far away from the mischief, though, and the cathartic “Change” is a cinematic retelling of the MC’s mistakes in life, from his broken home origins to dropping out of uni (this one not a mistake). Bashy is frank/smart/original enough to never paper over the gaps in his street cred—he addresses most of them headfirst in the smoky “Back Before,” where his wastrel days are recounted in a blur of obsolete games consoles and “Crusin’ round London in my 1.4 / That my dad bought.” This sense of perspective fuels his genuine awe for the party tracks, making the more lively moments on the album absolutely sparkle. If you can’t lose your shit to the roodboy minefield of “Who Wants To Be A Millionaire?” then one can only assume you’ve never left the borders of the Methodist Church. It’s an anthem to anyone in Scarface trackies riding the highs of a Saturday job.

The fine use of Scatman melodies and rip-roaring beats help bring Bashy’s vocals to the fore, and he packs a lot of soul for a high-speed narrator. Some clever production tricks have been set up here, not least on Bhangry/gospel hybrid “Life,” where the daily slog under the credit crunch gets a melodic jungle uplift, skirting concrete districts in the fight for drive. Bashy seems to cast himself as a rascally Pied Piper for these moments, leading his listeners into future light to shake off the coals of the present. In order to get there you have to party hard and take time to repent, though—the man does so himself on “Day Before I Die,” begging forgiveness from the friends at his graveside, voice cracking with emotion. His point—that the highest decoration you can hope for in life is that people don’t lie at your funeral—is a crucial one, and the crooning and pianos cement his contention in style.

And then the two bonus cuts: a strange choice, given that they’re two of the strongest tracks on the CD and easily could have filled in some duds. “Kidulthood 2 Adulthood”‘s cranked phasers illustrate the young offender’s rite of passage so perfectly you can see why it made the charts. Bashy is at his nastiest here, showing us the mania of hoods run wild (“If you ever try getting next to my dosh / Or if you ever try getting next to my Porsche / Your head’s coming off / You lil’ tart / Take off your bra, are you sexin’ or what? / I’m gonna ram your neck on my cock / And then you’re gonna fuck my bredrin or what”). Salvation lurks between verses, and the voice of the film’s anti-hero Sam Peel breaks through to make light of the chorus, his cry of “Gotta go from kidulthood to adulthood / I know / Now I must act like an adult would / React like an adult should” delivering its stark message.

It’s counterweighted by the controversial “Black Boys,” which—shock, horror—isn’t a reference to some quaint Olde English hamlet but a jubilant pep-talk to his brethren, rippling with pride and potential. You might need your tongue in your cheek to fully swallow it, but it’s hard to try and fault his intentions here. Or anywhere, if the truth be told—Bashy isn’t just about cleaning up grime or he’d never have made it this far. He’s interested in taking one of the more untamed strands of the urban scene and bending it to his own instruction, making something that not only moves you but stays with you. On Catch Me If You Can he manages to craft a slick example of a well done four-star record: four stars for method and content, one to keep tweaking for the future.