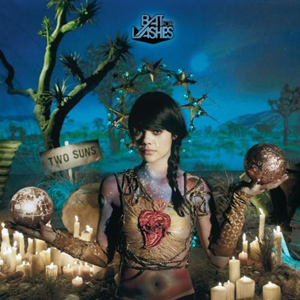 As with last year’s Saturdays = Youth by M83, listeners are easily forgiven for suspecting they’re being snookered into some sopping wet, self-indulgent, and writerly opus, the kind of which we here at CMG rarely muster much enthusiasm for. I mean, look at that cover, testament to wondrous Photoshop that it may be, and tell me Two Suns isn’t about getting cosmically profound all over the damn place. The bio mentions something ridiculous about spirituality vs. a pleasure-seeking alter ego named Pearl, and suddenly we’re looking out onto the vast wasteland expanse of Chris Gaines’ territory.

Except that I hear something far more exacting and precise happening here, at least more so than the Prince-sized self-fellatio it looks like at first glance. Two Suns is the steel-wristed lasso of the rarely revisited ’80s strongwoman. It subjects the personal nature of Natasha Khan’s declared self-analysis to the depersonalization of established genre mores, and so draws from good work that’s already been done to etch spaces out for another woman songwriter. And it does all of this without being a bloodless sociology project. Show me Khan’s giant-sized ode to being Khan, and I’ll show you an album that’s about being a female singer-songwriter in a world that is simultaneously easier for male singer-songwriters and yet still points to a traditional female voice that’s impossible to measure up to.

Influences like Björk and Siouxsie and the Banshees have been batted about since “What’s a Girl to Do?” emerged to justify the publicity generated as a result of Khan’s mainstream-friendly early 7” and an English hype machine that never quite knows when to shut up. As occasionally appropriate as those comparisons are, they’re flawed for being polemic. They posit Bat for Lashes somewhere between a universally revered powerhouse of the album format and a group better known for a self-aware manipulation of glam and stagecraft. But with Two Suns we can now add Kate Bush and the Cocteau Twins as a necessary middle ground, and so more seriously locate where this music is and where it’s likely headed.

Khan seems most comfortable as mainstream songstress, and she’s stretching that costume only insofar as it serves her stylistic purposes, only to resemble reputable characters and facilitate her self-examination with no intention of problematizing the whole affair. And, like Saturdays = Youth, the resulting album is one with excesses that are strategic. Say what you will about the shortcomings of shooting so flagrantly at the moon and in most cases I’ll agree with you. But getting past our hesitation to embrace such fearlessly self-centered exposition, Two Suns is one of the most consistently enjoyable albums of the year so far, masterfully produced, sparingly arranged, and unapologetically elevated songcraft.

At the heart of the album’s appeal is an impossible feat. Khan’s more romantic assertions—calling her boy “lover” a few too many times and her occasional forays into “knights in crystal armor” and “flame in your heart” territory—are offset by what is, astoundingly, a concise and effective narrative about that alter ego. Really. While the set-up is pompous (why does it need to be an album-wide concept? Aren’t songwriters always appropriating voices and speaking in character?), being Pearl allows Khan to operate independently of listener assumptions. On “Siren Song,” Khan sets Pearl to struggle against an impulsive desire for the domestic (“In the morning I’ll make you breakfast”) before “The siren comes calling / driving me evil” and she goes tearing off with great big piano strikes in pursuit of some aspiration or another. When she sings “I’ll tell every last boy that you’re my man / I’ll try not to let you down,” it’s a fresh inversion of the male-centered narrative we’ve become accustomed to since well before Kerouac popularized it, that myth in which women are equated with the conformity of domestic life. In “Siren Song” Khan is the artist with too grand a vision to be concerned with the notion of personal responsibility, and she’s got the balls to examine that desire. The calamitous drums that end the song are only appropriate given that Khan is expected, as a woman songwriter in a male-dominated mainstream, to simultaneously explore the boundaries of her craft while adhering to a stultifying anachronism. Gwennie stays home with Apple while Chris talks about politics and her eyes, and never the twain shall meet, right?

Opener “Glass” does immediately suggest Björk, making clear the album will be as much about percussion as it is about melody. Its creative yet unobtrusive drumming is sustained throughout much of the album, and is frequently combined with some of the least gimmicky uses of handclaps and shaker since Ga Ga Ga Ga Ga (2007). But those Kate Bush comparisons come flooding in during “Sleep Alone,” during which Khan makes an empty bed sound like a house full of poltergeists. “Daniel” is the album’s locus, its most memorable melody and most engaging use of both faraway percussive elements and chunky keys and probably the best song Khan has ever written. Big synths fall somewhere between an ’80s fumble with new technology and an outright appropriation of camp and house music to pattern dread where drama is called for, all naiveté and seriousness. It’s charming.

But despite its overall consistency, the album’s not without missteps. The misguided inclusion of a gospel choir in “Peace of Mind” sets the song’s brisk pace against the build required for such a bombastic inclusion, and at least renders it truly miraculous that Spiritualized pull it off so often. The duet with Scott Walker on “The Big Sleep” takes two titanic minds, each deserving to be exulted and luxuriated in, and crowds them together over a spare-parts piano; along with “Travelling Woman” this results in the album ending with songs that feel like hangers-on, hitting piano chords, singing about “telling lies,” lacking ideas.

Anyways, ignore the write-ups (uh, except this one), which won’t be able to help quoting all the spiritual mumbo jumbo about dualism, and enjoy what seems, to me, unstated genre practice at play on a very large stage. Two Suns is exceedingly easy to poke fun at, just like any big ambitious work tends to be, but there are plenty of moments when I feel that something’s happening here, something rare. Khan just might be the sort of songwriter who works comfortably on the level of grand metaphor—and rarer still, the sort that uses it to look inward. Those who pull it off are an increasingly rare breed.