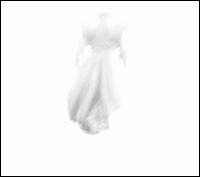 Bauhaus were, without a doubt, the first genuinely “alternative” (at least in the pre-grunge sense of the word) band I got into. At 15 years old, in the throes of the first of several identity crises I would go through during my high school career, I was introduced to the band by my first-ever girlfriend along with Dead Can Dance and the Cocteau Twins. It was an awkward time, and while I’d like to say that I’ve since grown up and completely ditched the goth thing, my love for these bands has never really gone away. Even though I maintain that goth culture was and continues to be the emptiest, most pathetically narcissistic youth fad ever. It’s also really expensive and uncomfortable, fashion-wise.

Oddly enough, all the extraneous baggage isn’t what I recall when I listen to Go Away White. While other bands I got into as a teenager (mostly Black Flag and Minor Threat, during my hardcore punk phase) I couldn’t listen to for years because of all the painful memories they brought up, I think I always implicitly understood Bauhaus as less a reflection of my own misguided intensity than just a really awesome rock band with a flair for overblown drama. This presumption has only been verified since I’ve come to realize the band essentially updated Marc Bolan with a post-punk shade of black. It’s unfortunate that all their makeup-smeared followers never seemed to realize this though; as a result the band’s still seen by some as a bit of a self-parody, even more so than the Cure—who at least have Robert Smith’s maverick status to go on.

Any arguments about how seriously the band takes themselves is bound to get in the way of enjoying Go Away White, which jumps between brooding death marches and lipstick-smeared rock ‘n’ roll with wild abandon. It’s not really an argument that interests me too much: I think it’s safe to say the band was eccentric and flamboyant in a way that embraced both bleak, hermetic poetry and punk’s provocative attitude. Most importantly, however, they did it with an attention to texture that made their music, if not “scary,” then at least appropriately atmospheric. One of the reasons I loved Silent Shout (2006) so much was that, like Bauhaus, the Knife are one of the few bands who have succeeded in making music that’s fun and dark without sounding kitschy.

Still, it’s a bit hard to imagine Bauhaus inhabiting a post-Pavement world, especially 25 years since their last album (Burning from the Inside); I had low expectations going in. Plus, even In the Flat Field (1980) and Mask (1981), the band’s best albums, were hit-or-miss. In the Flat Field has “Small Talk Stinks” and Mask has that superfluous final third dragging it down; they never recorded a Dub Housing (1979) or Closer (1980), even if they were good enough to. In fact—and as degrading as this might sound—most of the band’s really great songs can be found on their 2-disc singles collection.

Likewise, Go Away White has its less flattering moments: opener “Too Much 21st Century” is pretty fun, but feels like the band felt the need to address their age. As if having “21st Century” in your title isn’t passé enough, the riff is almost a carbon copy of that the Beatles’ “Taxman,” over which vocalist Peter Murphy goes on to articulate all his woes with modern society in a way that suggests he’s actually loving every minute. The band isn’t new to this kind of pop-art irony, but it’s never been their strong suit: unlike Bowie or T. Rex they’ve never been able to crystallize it into something subversive or provocative. And they’ve never needed to either, not with Murphy’s skill for penning twisted Bataille-esque narratives: classics like “Dark Entries” are full of satire, cruelty, and misanthropy that “Too Much 21st Century” doesn’t even begin to touch.

Perhaps that criticism is me copping to the “serious/un-serious” debate, but really my problem is more in terms of the (perceived) intent of the band: they sound like they’re reaching for social commentary and hitting, well, “Taxman,” but without the lyrical ingenuity. In that respect, “Endless Summer of the Damned” fares a lot better: in some ways they’re still using clichés, but in a completely knowing way. Even the title, with its hilarious blend of the Beach Boys and the Misfits, already suggests the kind of contradiction that all Crowley-heads embrace: that the apocalypse is actually a total blast, or inversely, that an endless summer would be a bit like torture. If the equation “apocalypse = fun” still sounds like a cliché then you need to lighten up.

Still, the point where Go Away White really shines is in the slower, brooding tracks: “Saved” and “The Dog’s a Vapour” are among the best vampire chamber pieces they’ve done; while maybe not as creepy as “Hollow Hills” or “Mask,” they’re just as claustrophobic. They also highlight the biggest surprise of the album: Murphy can still sing, and not in the classical/adult contemporary way that characterizes most of his post-Bauhaus solo work. “Saved” finds him moaning over high reeds, long organ drones, and muddy, distant percussion; these all complement his voice perfectly. If “Saved” is dank, then “The Dog’s A Vapour” is the mold floating in a puddle at the bottom of a mine shaft. Even when the song explodes in a burst of siren-like guitar slides (unquestionably the album’s climax) it never really loses its industrial minimalism. Also, try finding more twisted imagery on any album this year then “The dog’s a vapour / belched by Earth.”

Most of the album also finds the band stripping away their more refined, capital-R Romantic impulses and odd eccentricities (no “All We Ever Wanted Was Everything” here) for one of their most vicious, raw, sludgy albums yet. “Adrenalin” is an amphetamine-drenched trip with its “Shift / Crank / Pull” chorus only hinting at the dark inhuman things we’re capable of. But rather than putting this metaphor to the service of testosterone-edged jock rock like Black Sabbath, Murphy sounds genuinely frightened. The scream he lets loose towards the end of the track is lifted straight from “In the Flat Field”; it’s just as effective now as it was then.

Many of the songs themselves on Go Away White aren’t much more than par for the course as far as the band’s career goes—but, considering the time they spent away, that’s actually pretty damned good. Plus, the recording itself is pretty remarkable: while many older bands don’t adapt well to newer technology—making albums that sound either really dated or hopelessly overblown—Bauhaus have updated their sound with such subtle ingenuity I almost wish they’d go back and re-record their old records from scratch. The breakdown in “Mirror Remains” says it all: in the middle of spare, reverb-tinged palm-muted guitar chords, Murphy (or somebody) says “Right, that’s a solo there of some kind.” For all their overblown imagery and stage theatrics Bauhaus will never be tempted by over-indulgence.