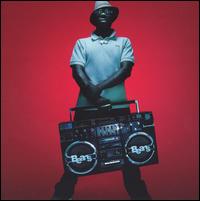 I have never heard a single Antipop Consortium track. Seriously, to the best of my knowledge I have no idea what those guys sound like. What I have garnered from two minutes of online research and a few more minutes talking with several fellow writers is that: A) Beans was a member of the group; and, B) he was better in those days. This latter fact is reassuring, because otherwise there would seem to be little reason to be paying attention to Shock City Maverick.

The album fails mainly in its inability to set itself apart; for a Warp release it’s dull, Beans isn’t enough of a rapper to carry the show by himself, and the beats feel like they would have been interesting if they didn’t just remain stagnant through pretty much every track. On the first listen I was curious, the second I was willing to give him a chance, and by the third I was ready to switch to the new Kings of Leon instead. Hell, even the old Kings of Leon.

As a rapper, Beans seems sort of just like an annoying seven year old stuck on fart joke mode: the scatological and vaguely homophobic seem to be his specialty. While Kool Keith has license to do that shit, Beans has neither the flow nor the beat skills to back it up, and the constant boasting gets old pretty quick. On “I’ll Melt You” when he spits, “I never strove to impress / No critic or journalist / Could ever treat my genius like jock itch,” I just find myself scratching away (especially because he feels this is strong enough to support himself and has therefore pulled out the beat). It’s not that he fails entirely--he works in a few good rhymes and his flow is decent if unimpressive--it’s just that his ratio isn’t so hot.

The beats are the really disappointing part. Warp is home to some pretty impressive beat-smiths, but Shock City Maverick makes it clear that Beans isn’t one of them. He’s able to set up some reasonably interesting beats, but after three or four monotonous minutes they seem a bit less inspired, not to mention that they all seem to be relying on the same basic electro-tweaking and simple syncopations. “Shards of Glass” and the actually quite remarkable instrumental, bell-heavy “You’re Dead, Let’s Disco” are exceptions, but aside from these, he seems remarkably low on ideas, and the album suffers as a result.

All the same, I’m still curious. Maybe over thanksgiving I'll head down the trusty record store and finally pick up Tragic Epilogue or Arrhythmia. My advice to you if you’re heading that way, too: don’t be lured in by the flashy artwork. Steer clear of the Beans, go for old Antipop if you need a fix, and if you just want to support Warp, I’m sure they’d be perfectly happy if you picked up that new Savath & Savalas EP instead.