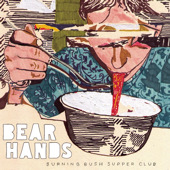 Bear Hands’ 2010 full-length album was fairly long in the making. Playing together since 2006, over a four year stretch of time, between an EP (Golden; 2007) and live shows, the band’s had a fair amount of room to shift their aesthetic. While still keeping songs like “Blood and Treasure” on the tracklist for Burning Bush Supper Club, they’ve strayed from the more on-the-nose, bloodlusty, British-rock-inspired tracks like “Long Lean Queen” to scrumpy, synth-embracing rock with grit underneath its shiny, indie-pop hooks. They concoct a sound that’s easily as catchy as that one One Door Cinema Club track, but still comes off as rough and unkempt as lead singer Dylan Rau’s dreadlocks. (If you haven’t seen him, he more or less looks like a tawny, homeless version of Adam Duritz.) Before you could thrash around to it, sure, but now with the band’s recent fondness for Fever Ray leaking in from every angle, you could—if you were so inclined—dance quite properly to it.

“What a Drag” most prominently digs into the nicest grit-rock inspiration I could think of in this era slanted equally towards Foals and the Beach Boys: Modest Mouse—right down to their “Dirty Fingernails”-like lyrics, all “you’ve got them long nails / I’m dreaming of your goddamn long nails.” They throw down a fair lot more naughty words, substance abuse namedrops, and aggression, tied-off with the occasional shrill breaching of vocal elevation that’s actually kind of…like that dude from Mindless Self Indulgence. It’s their bad boy “I’m a bird, man, I gotta be free” or “I’m married to the sea” track, with a heavy repetition on the chorus: “I’m engaged to be alone.” Rau’s a strong vocal presence and sings more like a guitar than a person. Which sure, he seems a little proud of, and which means often enough the self-assurance in his voice and lyrics can raise an eyebrow here or there. Especially if you’re looking for or are accustomed to a multi-layered parfait of wit and irony. And very especially if you’re looking for something modestly brilliant; where the bright moments occur, they’re a mass of intention and elbow grease.

Bear Hands do pace themselves, though, and while I was expecting a more “Tik Tok”-esque intro to “Whicksey Boxing,” it’s a surprisingly keyboard-laden, melodic affair; Rau’s vocals work to stretch taut over longer distances. It even has some charming chimes tinkling in around the outskirts. (A few shots of Jameson and even I’m not that mellow/ladylike.) Most of their alcohol (in moderation) praising is littered around in “Belongings” aside his fondness for weed (in moderation); “Can’t Stick’em” is an otherwise modern John Henry kind of ballad narrative, full of lines like “When you see a Grey Goose you’re a lucky man.”

The album ascends in the last two songs. “Camel Conventions,” a high-pitched and borderline disco song, is swallowed up by an amoeba of noise and distortion. “Tall Trees,” a song that’s one ukulele short of an energy-efficient compact car commercial, climbs to even higher vocals, Rau’s voice pitched up in the stratosphere. Bright with tambourines and a more resilient bounce to the strings, Bear Hands are practically dipping their toes into Jack Johnson waters. I’m glad they kept songs like “Blood and Treasure”—which features a busted-speaker, juicy bass, cowbell strikes, their yearning card exchanged for anxiety attack cards, and the album’s main resurgence of the more fitful, nicotine-stained fingertip sound of their earlier songs—because the album ends with two surprisingly inspiring tracks.

I’m reminded of Ely, Minnesota. Ah, tranquil Ely, Minnesota. Quiet but for the sweet chirrups of the chickadees, the chitters of red-breasted nuthatches, and the occasional raven caw. There are few things (besides Black Ops) that I enjoy more than watching Ely’s Bear.org Bear Cam and Den Cam. From the enchanting, woodsy serenity, to the more eventful moments like when a mommy bear birthed and reared a baby bear all on Den Cam, to watching the everyday goings on of the larger bear community on Bear Cam classic—well, it’s not the Shark Week thrill I was expecting when I first saw the words “Bear Cam,” but addictive nonetheless. Bears have a surprisingly wide spectrum of endearing habits. And like surly kittens of the forest, there’s nothing they seem to derive more enjoyment from than a rolling back and forth in the dust and dirt. (Well, it’s all snow now…)

What I mean is, while not being the Shark Week, teethed event their Golden EP was, this album is full of shifts, is trendy, and is a little expected: actually good dimensions to be added to the Bear Hands sound. Which came on more than a little strong in the beginning. All of four years ago. The added distortion, the incorporation of dance measures—it’s nice to see they’ve polished up their sound without giving up their rolls in the dirt or completely cleaning up their grit and manicuring their claws.