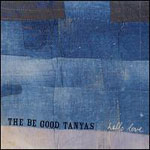 The Be Good Tanyas

People will fault this album for being too mellow, or for taking too long, or for being too reliant on covers. For fans, one of these points is true: it has taken the band too long to put out a new album. I’ve been waiting three and a half years -- that’s forever, it’s two Sharpies of X’s. I wore Chinatown (2003) like a favourite sweater for a straight year and a half. Tanyas: “Why you do me like this?”

But the BGT’s know what they’re doing. Hello Love lingered in development for the same reasons that earned them their loyal fanbase. It’s not forced, it’s true to the course of the artists’ lives. Frazey Ford had her first child, Trish Klein started her own band, ‘Po Girl, and they all needed a break from the heavy touring they’d been doing for the last few years. The album reflects a careful, caring course--and yeah, for that reason, it’s worth the wait.

First things first: to address the inevitable “too mellow” concern, I’ll just say that, yes, Hello Love is quite a bit more chilled-out than Chinatown (which, itself, was not exactly a wild party). If you’re like me, though, and a BGT’s song like “Reuben” might be the most upbeat track on a given mix-tape, you’ll have no real objections.

In keeping with the last two records Hello Love is comprised of about half covers and half originals. Unlike Chinatown--where the covers were mostly rearrangements of traditional folk and roots songs--the covers on Hello Love are a mix old and new. As they’ve done on every album, the Tanyas choose their material well and “inhabit” them, as Ford says, to make them their own. On previous albums they’ve revived traditional songs like “Oh Susanna” and “In My Time of Dying” to introduce them to new audiences. It’s refreshing on this album, though, to also be introduced to a few new songwriters. Parton sings Oakland-based Sean Hayes’ “A Thousand Tiny Pieces” and enhances the original’s stark vulnerability and reflection. “Scattered Leaves,” a Jeremy Lindsay (of Chicago’s JT and The Clouds) cover, is one of the album’s best tracks. Having come to the original after hearing the cover, it seems the BGT’s are picking up on the age-old folk tendency--as, say, Linda Ronstadt did with Neil Young, or Jennifer Warnes did with Leonard Cohen--to reinterpret the songs of great songwriters who possess less than perfect voices. Unlike the whitewashing of Rondstadt, the Tanyas somehow manage to retain some of the grit and resonance of the originals.

And, as usual, the Tanyas’ own originals match their covers song for song. “Human Thing” is reminiscent of Chinatown’s “It’s Not Happening” and shows Ford’s voice at its sexy, supple best, especially on the repeated lines “You got roots cannot be torn from under/ Won’t you shake it like you never done before?” “Ootischenia,” the most upbeat track on the album, may inspire spontaneous washboard and spoons playing. Parton shines on “A Little Blues”, a roots-influenced tune accompanied by Old Crow Medicine Show, and on the heartbreaking “Song for R.,” a song for a friend struggling with addiction. It features simple piano and almost whispered vocals, gorgeous cello and the most provocative lyrics on the album: “You see people coming from all sides / with their broken hearts and hollow eyes / and you try to love but it's easier to hate / when the seed that was planted was watered too late.”

What will always make the Be Good Tanyas stand out, in a roots/folk genre replete with superstar solo artists, is that they’re capable of juxtaposing their own songs next to the classics of the genre and tricking listeners into playing name-that-era throughout an entire album. But they’re also a generous band; in the spirit of roots music, they borrow and share and keep their music straightforward and unpretentious. Hello Love’s been well worth the wait.