1. Belbury Poly Logotone
2. The Hidden Door
3. From An Ancient Star
4. A Year and A Day
5. The All At Once Club
6. Time Scale
7. Adventures in a Miniature Landscape
8. Widdershins
9. A Great Day Out
10. Clockwork Horoscope
11. Remember Tomorrow
12. Model Country
13. Seed Ships 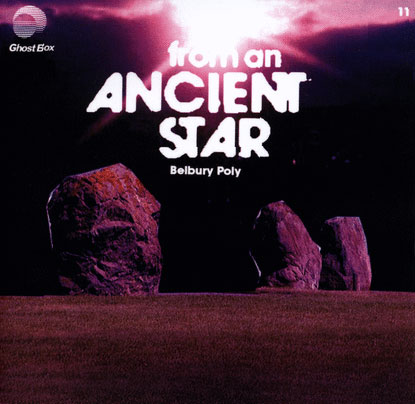 From An Ancient Star

Releases on Ghost Box never miss the mark. There’re two reasons for this: 1) there’re only eleven of them and 2) they all stick rigidly to the same agenda, namely: to recreate and melodize British cold war information films, all of them themed around the fictional village of Belbury. At the heart of this preserved hamlet lies Belbury Poly: the school that’s only just touched by technology, calmly feeding its young denizens on spooky Prisoner undertones. So, anyone brought up on Maggie’s milk who watched teachers outsmarted by VHS players, or anyone who wishes that Boards of Canada would revert to their first album’s sci-fi waves, make Ghost Box your new womb immediately. Not only will you feel like you’re seven again but you’ll also develop a fetish for learning.

Jim Jupp’s third LP as Belbury Poly sees him still working within his Thatcherite playground, calmly cataloguing each grain of tarmac as he continues to realise his vision. He’s always been keen to stress that his label’s sound is one of hypnagogia rather than reverie—Ghost Box take you to a pre-pubescent dream state, including all the rudimentary horrors of suddenly appearing nude between lessons. Humour plays an important part in From An Ancient Star, from the title track’s medieval widget and Ouija board beat to the hazy module of “Time Scale,” a druid ditty that mixes FX with runaway grandfather clocks. Here, audible seconds fly past you like HG Wells’ time machine, a voice instructing you to “be aware of the soft mountainous surge of time…infinite time, liquid in the room.” Anyone not suppressing the urge to snigger clearly never saw Look Around You that or they’re still scarred from the smack of the chalk-duster that taught them never again to put their hand up. As pupils bud off and more and more intersecting lasers get flooded with drums and keyboard loops, it’s tough to resist this wondrous trip back to the dreams you long since thought you’d taped over.

Pad-plagued folk also serves as a conduit for Jupp’s Belbury adventures, and on less domesticated numbers like “Widdershins” he maroons you in the woods for a day (for a fifty-minute set, you really get your money’s worth in terms of a mixed syllabus here). Of course, the flaw in the album’s rolling rose tint is not that everyone out there enjoyed school—the happiest days of my life were spent wishing the Predator would carve up the staff room—but that From an Ancient Star does suffer slightly in that at times it feels too mixed. When Belbury Poly slow down to focus on some individual gritty experiments, that’s when they truly excel: the flowering hymn of “Adventures in a Miniature Landscape” may begin as just another lonely ’80s title, but it’s certainly the meat of the album, not just because it’s the longest of its twelve constituent accomplices. Of course there were always going to be thirteen components in total—how could there not be—and how fitting that things should end on the nightmare superstition of “Seed Ships.” All disturbed owls and spidery movement, this could be the place where Xela earned his stripes, dropped into a dark coracle and pushed away by all his angered housemasters. And to think we’d only just finished playing with “Model Country”‘s ode to Hornby Miniature Railways, merrily colliding the synthetic birdies with lovely harpsichord bridges.

Memory’s a tough thing is what you learn at Belbury Poly; not remembering is tougher. You can’t remember your seven times table but you’ll remember the smell of semolina or that of the grey plastic tray with your pens and protractor in. From an Ancient Star is a wonky academy: sloping like Alice In Wonderland one minute, chiming like NASA the next. The important thing is that it’s not Hogwarts—like his fellow Ghost Boxers, Jim Jupp isn’t wrapping you up in clichés here, setting you up for the big fall in Big School. No, he’s working genuinely hard to hypnotise, to pull you back to formation. Everyone needs a blast from the past to gauge against their own current headstate, and while undoubtedly nostalgia can be dangerously narcotic, Belbury Poly prescribe it like a dash of good old fashioned radium, the eerie molecules giving you a rosy glow.