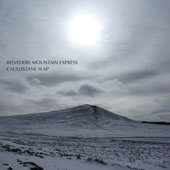 Unlikely combinations in music, part one: yodeling and chiptune; bass guitar meets slightly more melodic bass guitar (© Ned’s Atomic Dustbin); Isobell Campbell and Mark Lanegan. Now Edinburgh’s Howard Goodman can throw his own hitherto unattempted fusion onto that tiny pile of successes: crisp ambient electronica set to the whimsical strains of the accordion. He must have been sitting under one seriously powerful apple tree for this idea to hit him on the head, because for much of his third album as Belvedere Mountain Express, Goodman whisks you to a place so unique even the armed forces wouldn’t follow you (he seems to know this himself, his cover art depicting the deadly foothills where SAS recruits go to die).

However, Cauldstane Slap is more than just a burning-your-bridges record by a man slipping into a crevasse—Goodman’s accordion-led science fiction overtures are oddly listenable, and may just net him the award for originality he glimpsed when he dreamt up the project. As an adoptive Scotsman, he has the insight to choose which particular instruments best reflect the wilds of his country; as a confirmed pioneer and possible lunatic, he has the foresight to carefully hone his production, and—using one or two clever back-up tactics—make his hallucinatory adventure feel as brave and devourable as the early works of Jules Verne.

The first of these back-up tactics is that in order to normalise his mixture of space FX and accordions (and detract from the image of intergalactic Frenchmen), Goodman has employed a vocalist, one who’s voice has the power to reshape the parts of the album she’s allowed on. Becky Rose Fisher’s delivery lights up the ambient whooshes like birdsong, and her style—oddly similar to the “tentacled diva who makes Bruce Willis cry in The Fifth Element—gives the strangeness of the record some humanity. When she cuts in on “Sun Safari,” the glittering horror and jets of waste suddenly seem inhabited, and as Goodman revs up his cocktail of oddities—robot orgasms, boozy accordions, ultrasonic tones that’ll make you think your neighbour’s fire alarm’s been activated—Fisher floats protectively besides you, emitting an ethereal glow that says it’s OK to lie down. She emits an even brighter light on “Bonaly Tower,” where her strains of “in front of Bonaly Tower / there’s a mysterious glow / lights, colours, and fading” match Goodman’s swaying on his keyboards. The blasts and gurgling, plugging holes he produces, come straight from the corners of his mind; the use of Fisher’s voice is from the smart end, the part which walks him home after a night spent gobbling mushrooms.

To those for whom one hour of Parisian meteor storms is just too big a spoonful to swallow, Goodman incorporates some recognisable ideas to prop up his more mutant brainwaves. “Our Brumous Isle” is my tip for the Boards of Canada crowd: you still get plenty of European cinema passing through quasars, but the freak synths and hip-hop squeals suggest some studying of Warp’s finest. On the slightly more whacky title track he again manages to restrain himself, and augments the echoes which sound like “Jerusalem” with firework pops and slide guitar. Even the bat-shit closer “The Last Livonian” has a couple of handholds to steady against. Sure, it might begin with a badly recorded German phone call, but the radio loops and Plutonian dance tune have a noddable if well buried rhythm. You might not find it being taken up by accordion street performers (or if you do, expect their monkeys to attack them), but it won’t exactly fill your head with French films shot in the asteroid belt.

Personally, I’ve got nothing against French films shot in the asteroid belt. You can’t accuse Howard Goodman of taking the easy route, and we need more ideas as backward as this to prove that—despite scientists telling us every possible sound has already been recorded on existing LPs—somewhere there’s someone in a stone bunker who’s gleefully experimenting with bellows. Belvedere Mountain Express has surely made one of the most original records of the year, but—and this is his insurance—still feature enough twisted familiarities to draw in the curious stragglers. Want Blade Runner melodies? They’re here. Hammer Horror noises, funky Casios, digital harpsichord, ballet? Also present. Becky Rose Fisher deserves her share of the credit for brightening half of the tracks, but it’s Goodman here who’s brought his concept to life, even if he does over-egg the runtime. Nine minutes of hearing R2-D2 at the Champs-Élysées poses risks to most people’s sanity. For starters it could encourage some renegade copycat to mix Gregorian chants with jungle.