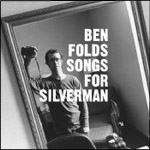 I’m sure you get this all the time, but I’m a big fan and have been ever since I bought The Unauthorized Biography Of Reinhold Messner. I picked it up after hearing “Don’t Change Your Plans” on Y107’s “The Chris Carter Mess,” and loved it so much that you guys became my first favorite band. I’ve always been drawn to you as a singer; vocally, you’re so warm and approachable, and you sing about subjects I can relate to: failed relationships, idealized women, your parents giving you shit, the list goes on and on. You’ve always been funny, too; I’m sure I don’t have to tell you how well “Underground” and “Battle Of Who Could Care Less” skewered the indie/slacker scenes, or how I appreciate the sad songs more on Messner because your dad’s surreal voicemail is in the middle of the album to remind us that laughter is just around the corner from despair. Anyway, I’m writing to you because your new album, Songs For Silverman, just feels like it’s missing something. I like it better than Rockin’ The Suburbs, but what’s up with all this old guy stuff?

P.S. Those new guys in your band play just like Darren and Robert! When are you guys going to do a reunion tour? Also, your “Bitches Ain’t Shit” cover is phenomenal.

Songs For Silverman is a return to form after the relentlessly overproduced Rockin’ The Suburbs and three hit-and-miss (heavy on the miss) EPs. Musically, Silverman is his best effort since Messner, reverting back to the Ben Folds Five trio format with new bassist Jared Reynolds and drummer Lindsay Jamieson --- who also happen to sound a whole lot like Darren Jesse and Robert Sledge. While the new three-part harmonies aren’t quite as rich as the Five’s, at least they exist, and the new band's instrumentation is notably smoother and more fluid.

Which isn't to say that I meant a return to BF5 form by any means, but there are some great songs on this album: “Gracie” is an “awww!”-inspiring ode to his daughter; “Jesusland” could’ve held its own on Messner, shuffling along until the song reaches a stunningly harmonized chorus; and the segue of “Time” to “Prison Food” is great, concluding the album with two of its most emotionally bare songs. “Alone, alone again,” he sings on the final track, just before descending into a fuzzy bass freak-out.

Still, Folds falls short lyrically. Example: “Why you gotta act like you know when you don’t know / It’s ok if you don’t know everything,” he sings in “Bastard,” a song that masks its preachy lyrics with solo breaks and a poppy melody. He used the same formula on the Sunny 16 EP, and it simply isn’t his style. Folds’ formerly effectively sophomoric humor is slowly evolving into the adult-contemporary potshots he once admonished on “Uncle Walter,” though overall Silverman tends to shy away from this.

It’s not his talent that has changed, just the subject matter. I won’t make the inevitable Billy Joel/Elton John comparison because Folds thankfully isn’t there yet, and sure, I’ll allow for the whole wife-and-kids maturation thing, but Folds has always drawn me in with his perceptive, sarcastic narratives. When he wants to write a really heartbreaking song, he still can: “Give Judy My Notice,” the lone song taken from his recent EPs, is a glimpse at the kind of pointed relationship analysis Folds used to characterize whole albums with. “I come running when you want me here,” he sings, “and when you want me to, I disappear.” Unfortunately, he drapes the new version of the song in pedal steel and cloying backing vocals, the album’s only musical judgment error. He makes up for it on the next track with “Late,” a bittersweet tribute to Elliott Smith as poignant and personal as anything he’s ever written.

I’m being a little harsh on Mr. Folds. From the sound of this album, we’re both still hung up on Ben Folds Five breaking up, but at least Folds remembers what made them stand out in the first place. The humor might be gone, and Songs For Silverman may not the reunion tour we’ve waited for, but it is the best thing we've heard from him since Messner --- and If you're thinking "that doesn't mean much," he's about to start winning you back.