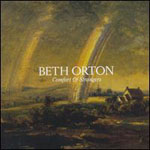 Since production is what defines Beth Orton’s latest, Comfort of Strangers, I might as well cut to the chase and state that it was produced by Jim O’Rourke. Yes, Jim O’Rourke -- the Jim O’Rourke who revitalized Wilco on Yankee Hotel Foxtrot, co-produced A Ghost is Born, is a member of Sonic Youth, has released upward of a dozen of his own recordings, and has produced the work of a schwack of other artists. He’s only 36 -- was born just a year before Beth Orton, as a matter of fact. No Celine Dion-style older-male producer/rising young diva romance in the stars here. But one might, if one were inclined toward cheesiness, say that Orton and O’Rourke’s pairing on Comfort of Strangers is a match made in heaven. Even their names sound compatible.

It’s impossible to avoid freaking out over the production of this album -- it’s that good. The first time through, listening to lyrics too closely and making judgments early as I’m wont to do, I wondered if it was just O’Rourke’s production that made it sound so good. Maybe I was wary after Daybreaker, which, to say the least, failed to dazzle. There likely wouldn’t be such emphasis put on production, though, if Comfort of Strangers didn’t sound so different from the album before it (Daybreaker [2002]) and the album before that (Central Reservation [1999]) and the one before that (Trailer Park [1996]); although there’ve been highs and lows in this discography, Orton’s been looking for a producer who shares her vision for some time now. Luckily she’s found him. And my early judgment was way off -- Orton is equally responsible for Comfort’s success.

Comfort of Strangers isn’t only Orton’s best album to date, it’s her most daring. Although still charming and edgy, she’s no longer bumming around Central Reservation in “last night’s red dress” basking in the giddiness of the morning after. Instead she’s putting the personal on the line in a new way, and this revelation is made possible by O’Rourke’s focus on her voice. Whether she’s intended it or not, Orton’s always hidden a bit behind her songs’ production (not to mention, among others, The Chemical Brothers). On her first three albums her voice was never brought to the forefront to deliver on its known potential; although standout, at times, on Daybreaker especially, it’s been dragged by dull production into droning monotony. Finally, with Comfort of Strangers Orton’s voice has come to life, and her songs now have the space to say something.

“Conceived”, the album’s first single, is an excellent example of Orton and O’Rourke’s perfect symbiosis. O’Rourke’s effervescent and playful bass line gets the ball bouncing and passes it to Orton, who strums a soulful, offbeat riff, then sings with the most confidence and poise I’ve heard her muster. Her harmonies animate the song, as do its buoyant strings. Throughout Comfort of Strangers O’Rourke and percussionist Tim Barnes drive the songs forward with their charged and innovative rhythms, allowing a track like “Heartland Truckstop,” whose repetitive melody might have left it to be plastered as wallpaper on Daybreaker, the galloping fervor to make it interesting. Similarly, on “Heart of Soul”, the background string and piano arrangements are expansive enough to enable Orton to belt out the lyrics “put a little love in your heart” and for them to sound profound and heartbreaking (if a little frenetic).

In a recent Harp interview, Orton says working with O’Rourke “was just a very spontaneous outpouring. The analogy I use is a bit like I was drowning before that, and the point that I came up for air was exactly the moment when I met Jim O'Rourke.” You get that sense throughout the album, that Orton’s been liberated to set out in a new direction, and has hit the ground running. The songs’ themes are also of breaking free; in most of these songs, Orton acknowledges hurt and failure, but determines to keep moving. In “Comfort of Strangers,” a piano-driven meditation on our smallness in the face of eternity, she sings of learning pragmatism through heartache: “I’d rather have no love/ than messing with the wrong stuff.” As always, what makes her lyrics penetrating is her voice. Shot through with a healthy dose of melancholy, it wears its heart on its sleeve while it casts a side-long what the hell are you looking at smirk, and it’s this contrast that compels.

You know those pads of paper you get as a kid? They come with a colourless “magic” marker, and all you have to do is colour over a page, and a beautiful picture is revealed underneath? You know where I’m going with this, but on Comfort of Strangers Jim O’Rourke’s that marker, colouring with just the right delicacy to reveal Beth Orton’s folky, soulful, timeless heart.