Other Records by Bill Dixon with Exploding Star Orchestra

Exploding Star Orchestra: We Are All From Somewhere Else 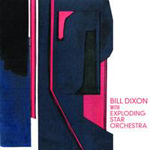 I’d originally intended to structure this review around how stupid that spoken-word introduction to “Constellations for Innerlight Projections” is, despite the quality of the music. I’m not exactly taking that statement back: music, especially jazz, can speak for itself, and any amount of extraneous philosophizing will inevitably just be a poor substitute. At its worst, as in Charles Mingus’ “The Chill of Death” or Miles Davis’ “Inamorata,” the narration interrupts and detracts from the music. At best, we get a limited introduction to a theme that the music plays out; a set of rough guidelines for the musicians (and listeners) to keep in mind. Here, the theme is “cosmic loneliness,” and there’s plenty of the token bullshit attempts at feigning profundity: “Take your time / There’s plenty of time / Don’t take your time / There is no time.” Whoa. Slow down there.

Still, I can appreciate the point at which the narrator seems to get lost towards the end, stringing together words like “space,” “time,” “matter,” “sound,” “project,” “reference,” and “black hole” in a way that suggests even he isn’t sure what he’s saying anymore, until finally he ends with the word “beauty” and the musicians (who have been tinkling in the background the whole time) finally let loose with an earth-shattering blast. Exploding Star Orchestra seem to acknowledge here how much words eventually collapse under their own weight.

Evidently the band isn’t shedding their astronomical metaphors anytime soon, and while the idea is hardly original, Exploding Star Orchestra manage to construct illusions of physical and aural space even better here than on their debut, We Are All From Somewhere Else (2007). Part of this is undoubtedly the push from legendary free jazz trumpeter Bill Dixon, who orchestrates the bookends of this hour-long set, “Entrances/One” and “Entrances/Two.” But it’s the 24-minute “Constellations,” conducted by cornetist and de-facto leader of Exploding Star Orchestra, Isotope 217, and the various incarnations of the Chicago Underground collective, Rob Mazurek, that’s the real highlight here. The track oscillates between dense walls of sound and moments of near-silence with Mazurek’s cornet spitting out staccatoed, heavily-reverbed expressionist sounds like smears of paint over a blank canvas.

The “Entrances” pieces are impressive as well though: both starting with heavy, percussive workouts with the dual trumpet/cornet blasts of Dixon and Manzurek sprayed lightly overtop, then gradually transforming into slow, spaced-out drones by the end. These dynamic changes are a lot smoother than on the band’s debut. While tracks on their first record were mostly divided between abstract, psychedelic wash-outs and big-band jazz, here both tendencies blur into each other. The emphasis on texture and melding diverse, heavily-improvised instrumentation into a thick blanket of sound distinguishes this from just about any conventional jazz.

Also, despite the fact that the songs are only loosely structured, there’s very little in the way of solos; the intention seems to be for the musicians to blend into each other as much as possible. This is a factor which makes the album somewhat difficult to listen to, even from the perspective of free music: while most free jazz and free improvisation at least has the benefit of allowing the listener to focus on its constituent parts, here it’s nearly impossible to parse out the individual instrumentation. Fortunately, that’s also the album’s greatest strength: every player exerting just the right amount, like the opposing gravitational pull between planets that keeps the universe from collapsing in on itself.