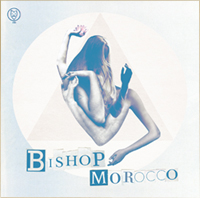 I know, or at least I’m pretty sure, that emulation isn’t anything you can get outside of. Or at least that attempting to get outside of emulation isn’t much more than hopeless idealism at best and superficial delusion at worst—unless you’re some kind of Flying Lotus-level genius with a Cosmogramma lurking somewhere inside you. Yes, it’s true that it’s all been done before (hoary cliché though that is), and when we bestow upon something the prize of the term “groundbreaking,” what we really mean is “surprising” or “hasn’t been done in a while” or, more tellingly, “I’m not familiar with this.”

Believe it or not, this sort of stuff matters if you’re going to assess something like Bishop Morocco, an album with such a faithful ear for the Manchester sound as to renders itself almost indistinguishable from it—Joy Division and Stone Roses incarnate for the umpteenth time. So it’s up to you, dear reader, to decide—keeping in mind that it’s totally okay to emulate like crazy—what matters less to you: that you’ve heard this all before, or that this is a catchy, well-produced, well-performed record.

You see a 68% hanging up there, so it should be fairly clear that I’m a straggler to this debate. I think that unless something surprises, it’s hard to imagine why it needs to exist; unless something is thoroughly boring, it’s hard to get mad about the fact that it does. (Harder still, it turns out, to write about it.) Ladies and gentleman, I give you Toronto’s latest batch of perfectly capable new wave revivalists.

One half of Bishop Morocco, Jim Sayce, was in Tangiers, a band that seems of the same genus as this band but that sprouted mutationally and, yes, surprised the hell out of quite a few people back in its day. Tangiers were one of a slew of excellent second-tier Toronto bands that helped put the city on the map, that pointed out that even Toronto’s pedestrian copycats were, for a time, a cut above Portland’s and Vancouver’s and Chicago’s. But Tangiers’ most recent effort came about five years ago and so one assumes, because they were on a one-album-per-year tear, that that’s all she wrote.

Bishop Morocco doesn’t suggest or explain the five year gap; it has retro New Wave guitars and effects, a dead-to-rights homage to Joy Division’s doomier side that is “Our Time”—with its obscured vocals and bleating, car alarm synth—and soaks its catchiest song “White City” in delay while hanging big, echo-y drums all over it. Similarly, “Townies” couples with the album opener to demonstrate the band’s composite allure, its moodiness and precision. But you haven’t heard this before just because your local bar’s Indie Night demonstrates the continued vitality of “This Charming Man” and “She’s Lost Control” and “I Wanna Be Adored,” but because the songs that follow those songs are so obviously indebted to the same sound. “White City” might stand up against the best of the fiftieth wave of these types of songs, but it’s still the fiftieth friggin’ wave.

And so this review is either totally useless or as to-the-point useful as it could possibly be; Bishop Morocco is unhateable, may even, in its better moments, approach real appeal—they have the experience to know how to assemble a record’s worth of tuneful, aesthetically cool rock songs, and “White City” is as good as anything you’ll hear this year—and yet I suspect that their appeal can’t possibly last. So direct is their emulation, and so quickly will that same emulation be undertaken by yet another (and another) band, that I can’t help but think they’ll suffer for their surfeit.