Other Records by BJ Nilsen 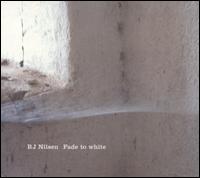 While I profess never having visited Nykoping, Sweden, judging by the online weather averages, I would imagine it to be a lush landscape nourished by the moderate rainfall it receives throughout the year. I would guess that the winters are cold, and that the summers are moderately warm. I would think the sun’s glare to be deceptively strong, particularly during the latter part of the skiing season, which would be excellent during the proper months. All in all, I’ve created a pleasant hamlet in my mind for jetsetters and tourists, one that begs to be populated by lovely B+B’s ran by married couples with rhyming names.

How could an artist who seems to revel in the sinister aspects of nature such as B.J. Nilsen (a.k.a. Hazard) hail from such a potentially tranquil environment? His latest release, Fade to White, violently erupts through my tentative mental image of Nykoping like a jagged obsidian obelisk. Where there were once quaint cottages are now smelting factories, churning viscous black smoke into the air that rains down on the surrounding fields like ash from Vesuvius. No one lives near Nykoping and mothers warn their children to stay away from it. The trees have died; in their place a stretch of unfinished highway.

Since adopting the moniker Hazard, B.J. Nilsen’s work focuses on his relationship with both nature and time through a distinct ambient sound. Though Aphex Twin is an obvious parallel, Fade to White combines Fennesz’s electronic manipulation of live instrumentals with Chris Watson’s fascination with raw field recordings. However, unlike the aforementioned pair, Nilsen has little interest in melody or percussion, instead choosing to focus on a sound that could be considered industrial ambiance: an atonal M83, if you will.

An album such as this one was meant to be played in one sitting; discussing individual tracks are more similar to analyzing a Francis Bacon painting than a piece of music. However, every song has a unique aspect, a specific noise or glitch, that allows Nilsen to avoid repetition without taking away from the greater, albeit depressing mood. Synthesized horns vibrate and wail over what sounds like two wet rocks scraping each other drown on “Grappa Polar.” Although the beginning of “Dead Reckoning” more than likely is the sound of rain and wind fed through a laptop, I could not help but imagine the noise of wolves feeding. And a gently looped organ suddenly erupts into a cacophony of blaring synthesizer on “Let Me Know When It’s Over,” a track both hauntingly claustrophobic and coldly intelligent.

While there is a certain fatalistic beauty in the tones of Fade to White, something akin to a mammoth trapped in a clear glacier, the chasm between artist and listener caused by machine (the ever-present debate of electronic music) is vast. The final product of Nilsen’s work has more computer than person/nature, leaving Fade to White cold. Yes, this is deliberate, but almost too much so for its own good, thus alienating the listener. Example: for nearly eleven of the obstinently deliberate fourteen minute long “Nine Ways Till Sunday,” a painful screech plays in the background that becomes intolerable. Is this a truly avant-garde piece of music or simply an electronic artist not reigning in his own technology? I would tend to side with the latter.

That is not to say that Fade to White fails in its goals by any stretch of the imagination. Rather, Nilsen has created a niche for himself with his latest, albeit a lonely one. What inevitably separates Fade to White from, say, The Tired Sounds of Stars of the Lid, is both how original and how despairingly bleak Nilsen’s tracks truly are in their relation to nature. And what inevitably separates the casual from the hardcore ambient fan is who can repeatedly listen to Nilsen ’s metallically sober image of nature.