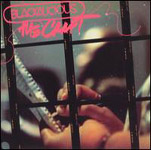 This is an album by Blackalicious and it’s called The Craft, which might create a couple conclusions. A) Alliteration: alotta-it; B) After 58 minutes, anyone — literally, anyone — could confirm Gift of Gab and Chief Xcel as more than competent muscles in the Blacklicious anatomy, a body greater than its parts, its parts being a slick dictionary of an MC and a meticulous beatmonster (along with a live band composed of some members who worked with Femi Kuti, the dude who plays drums with the Beastie Boys, and Vincent Segal, cellist and string arranger and French, among many); C) Ever present, even more than a righteous “next level” mantra, should be the glee of discovery, like hearing “Chemical Calisthenics” for the first time without having heard “Alphabet Aerobics,” or like hearing “Make You Feel That Way” and then having that happen; or D) You’ll learn something.

Undoubtedly, Gab has a way with assonance; pounds consonance like it owes him money. He’s fast and enunciates well, never tripping or losing a beat in even the hairiest situations. Better, his vocabulary’s impeccable, his words conjured from esoteric thesauri able to still maintain a cogent purpose throughout the verses. Mostly, what made Blackalicious’s last two proper albums so engaging was how Gab chose to reel in the tentacles of his glossolalia, and what makes The Craft such a disappointment is how he forgets that restraint, instead opting to crowd the tracks with ceaseless, pretentious sound.

Nia had an unflappable innocence that shouldered the heavy-handedness and Blazing Arrow used deep funk chatter and layers of synth ambience to urge the MC to calm down. Now, “Rhythm Sticks” plods through spelling bee clichés, muddied into barely decipherable sibilance by a poorly chosen echo overdub, “Your Move” trickles into guttural nonsense (besides Xcel rehashing the beat from “Green Light: Now Begin”), and “Give It To You’s” chorus manages middle school poetry, only spoken faster: “Rhyme for rhyme and line for line / The lyrics from the mind, this prime, arrive on time / They rip into your finest mind, sublime, the kind / Of spitters who would shine divine with rhymes of light…” Doesn’t that sound nice if you say it out loud? Even divorced from the beat. Reconsider that, because clever wordplay can get pretty rudimentary when the beat fails to help define the course of the lyrics.

That said, The Craft goes to all ends to define exactly what the title means. The titular closing track, easily the best cut here, downplays Gab’s skills in order to place him as some kind of spiritual conduit, a “vessel” imbued with the responsibility of flow. I appreciate the humility, it’s refreshing to get an MC willing to denigrate himself without appearing weak, and Xcel’s Theremin whistle compliments an elephantine bassline perfectly. If “The Craft” were at the opening of the album, we’d have a different story, because the same theme is beaten to death almost verbatim through tracks 1, 2, 3, 7, 9, and 12, the rest of the album infused with the highfalutin promise of mind-blowing hip-hop. Only, “The Craft” is thorough and enough. This, then, makes Gab, for all his huggable ideologies, seem like a prick, taking to a stagnating art like it’s an important meeting with higher ups more than an indelible passion.

Anyway, besides “The Craft,” “World of Vibrations” and “Supreme People” are the only other two to leave the same imprint. “Vibrations” takes up where Arrow left off, moving on a greasy snare and carnival diddle, and “Supreme People,” proves that, yes, Low End Theory, Yo! Bum Rush the Show, and Straight Outta Compton were big influences this time around. Plus, it’s cool when Chief Xcel pulls a sweet, wobbly sound out of typical scratching. Really, these songs succeed because Gab rides the groove instead of drawing attention from it, and Xcel allows himself an airy pleasance, mixing the disparate parts into singular entities instead of washing them together.

Being Blackalicious: Xcel tried to move from the heavy sampling of previous efforts, creating beats, stripping them to an essential snare and high-hat, teaching them to the band, who then played, improvised, etc., and finally processing the recordings into over one hundred viable arrangements for Gift of Gab. So, The Craft is as deftly furnished as a hip-hop record can get. Unfortunately, the overwhelming majority of Xcel’s beats are tired and flat, pieced with an expert’s eye, but still boring. Like, OK, in “Side To Side” it’s nice to hear from Lateef, but, as Aaron “nit-picking with the skillz of a 5-yr-old” Newell has mentioned, it “sounds suspiciously like ‘Fit But You Know It.’ ” Then, Gab superheroes through the dreadful duo, “Rise and Fall” + “Black Diamonds and Pearls,” pooping out after-school special fodder, offering nothing as far as realistic solutions to gigantic social ills go, and the whole thing is smacked thin into something devoid of fun. And, “THE RISE…,” eh? C’mon, just stop.

The best way to sum this all up is around half way through “Your Move” when Gift of Gab’s talking all fast and then there’s a multi-tracked sigh. Exactly. This shit’s tiring, ostensibly where Blackalicious shoulda gone, but forgetting the fun, the glee, the simplicity, and piling on histrionic bullpuckey. The sigh comes from realizing there’s still over a half an hour left.