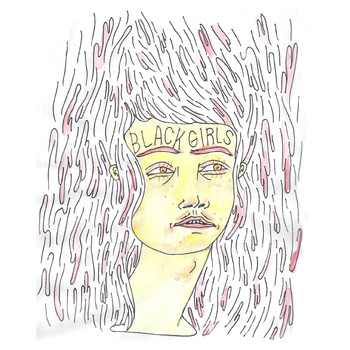 Now is not the time to stop questioning the literal-mindedness of band names featuring women. If you see the name “BLACK GIRLS” and just go on and assume it’s one dude making music in his basement, your gut’s at least half-correct. A mixtape cassette, yoinked from the womb of one of my favorite new labels, Two Michael Jordans (MJ MJ), BLACK GIRLS is a split between two decidedly non-lady bands (Blackhawks and Radiator Girls) executing two of my favorite genres (‘70s/‘80s psych-rock and ’50s/‘60s garage rock) with a uniquely appealing verve.

Blackhawks—a patchwork of local Philadelphia artists: Dan Svizeny of Nude Beach and Cough Cool; Adam of Nude Beach; and Yohsuke from Bananas Symphony—inhabit BLACK GIRLS’ A-Side with a melodic overhaul of late ’70s psych-rock and minimalism paired with complexly textured, Mercury-Rev-like bursts of climactic orchestration. An ambling rhythm and fittingly dozy, on-the-road lyrics that are more the remorseful sentiments like you’d find on a Two Gallants track (“What you know is that / I can’t go back”), “Sunday Morning” is quickly recognizable as no Velvet Underground cover. However: as Spacemen 3 is one of my recently proclaimed, favorite bands of the ‘80s, it was a happy accident to stumble upon an unexpected cover of their track “More Rainbows (Come Down Softly).” Expanding on Spacemen 3’s sparse and minimalist executions, ornamental guitar ambience seems to wash in and evaporate in distortion around the vocals. Beautifully executed, it has a gradual, lower-key build, lush with ambient churns of guitar froth erupting around lyrics “Come down softly.” Primarily mellow-tempered tracks, Blackhawks’ consistently clear vocal melodies and slow hooks are broken up via shakers, misty-eyed ambient tones, and chorus work which slide over into psychedelic, shifting keys and bridges.

While the first half of the mixtape employs a Jesus & Mary Chain/‘70s photo filter, the Radiator Girls B-side is a more shoulder-shaking, cymbal-sloppy conflagration of ’50s and ’60s garage (parents’ basement?) rock, presented ultimately without cheeky or comedic fusion—give or take some wry turn of lyric. A band neither female in orientation nor containing more than one individual, the Radiator Girls tracks were written and recorded back in August of 2010 by Minneapolis’s confirmed non-lady Nicholas Henderson. In his parents’ basement. Which is an odd thing to picture, given the amount of unencumbered howling, yipping, and shouting going on in the raucous rock tracks.

B-side opener, “Eerie Body,” slowly churns up fresh percussion and low swooning vocals that break into a rapid chorus and, right off, hit that particular ’50s beat sweetspot of mine. This over lyrics “I swear to God my love is true, to tell the truth, I’m afraid of you / I’m afraid of your body, body.” Deceptively vivacious and with the dropshadow of tinny vocals, it’s almost impossible to envision any of this happening in spliced-together, pre-recorded moments. Moving with a natural, live-recording mess of momentum, it just sounds like a band giving it to’er with a kind of shitty recording device. You can all but hear the guitarist’s girlfriend support-dancing convulsively off to the side.

Though there’s little carry-over from one band to the other lyrically, stylistically, or even influentially, both Blackhawks and Radiator Girls have smushed together on the BLACK GIRLS compilation cassette to form another seriously juicy, summer mixtape from the MJ MJ label. In the first instance employed liberally, with intention and sophisticated restraint. In the latter, well, entirely without restraint: both sides, with their respective comprehension of how to pair good-natured slowjams and equally generous bursts of satiating rock-outs. Well done, ladies.