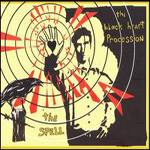 While Pall Jenkins--a.k.a. Paulo Zappoli) lead singer, multi-instrumentalist, and one-half the core duo of BHP--has perfected his near-drowning croon for four albums of martial, swamp dirges, the ugly limitations of his voice, only hinted at in Amore del Tropico (2002), now, with a fifth album, come to full, mediocre realization. It seems an apt way to begin a review about The Spell; for an LP charmed with hints at band member permanence and a “return” to “rock,” regardless of its ability to rock and regardless of having no said rock to return to in the first place (the hard place), Jenkins’ voice, still cuddled in echo, is front and center in the mix, pared of most glut and import that comes with the stylings of their previously ominous records, and, as such, sets the album apart from its forebears.

Knawmsayin, Bleeding Black Hearts, Charred AortaArmy? Think “Did You Wonder,” in spirit, over and over.

The opening vocal bars of “Tangled,” while fundamentally in the same vein as every other Black Heart Procession outing, quickly, semantically disappoints. “There is a place where I stay by the sea / Always alive, she said, in me, you’ll be,” Pall sings, and, mercy me mighty drone tropes, we can clearly decipher what he’s saying, have only crappy couplets over which to concentrate, and in this full disclosure his voice strains unpleasantly, the seams fray; his peat moss lungs are no longer a shuddering piece of sonic tone poetry, the voice is the whole deal, and he really pushes hard to hold a note. Let me reiterate: Why imbibe the same game plan as before, the same closed chords marching between mewling violin tremolo and pristine piano lines, the same repetition of dungeon bass drum, when the voice, the vocal individual is now, for all talking points, the focus? Let me try again: How can a band known for morose, wandering chamber music switch tracks to something more accessible and avoid sounding melodramatic, or, at the worst, carnivalesque? This question, so the press might think at least, is answered throughout The Spell. Here’s how they try.

Solution one) As previously studied, a group can front vocals not only through production technique, but also through songwriting. The Black Heart Procession take their typically signature whorls of sad, wailing sound, and draw back the impact, instead injecting most hook, melody, and emotion, apart from stately emotion “darkly baroque,” into the vocal performance. They do have a sly grace about their new arrangements, disguising the songs as expected BHP fare and still soaking the vocals in all matter of effects. Nothing is overtly demonstrative of a “new direction,” and due to this, The Spell preserves a solemn gravity inherent to the band’s catalog so far. But, apart from maybe the lazy piano line of “Places,” Jenkins’ vocals take on double duty, manifesting tune, build-up, tone, and climax as atmospherics once did, leaving the same flourishes of gothic post-rock to now end up limply, monotonously behind the lead persona. Perhaps, then, with so much burden to shoulder, Pall’s voice, familiarly once at arms with the grand sweep of melancholic orchestration, now seems creaky and forced, creating a possibly unintended tension with the sheen of violin and warm bed of dobro.

Solution two) Since you, hypothetical band known for sulky, portentous epics, are aiming for something more concise, something more reliable, as physically evidenced by permanent inclusions of laconic shoegazer (bassist Jimmy Lavelle), studio pop drummer (Joe Plummer), and obligatory violinist (Matt Resovich) into the hypothetical fold, as well as through less grittily produced vocal tracks, then an obvious choice would be to write relatively shorter songs than what would be expected by hypothetical fans. Fuck patience! Check; The Spell is not chronologically stunted and pop-radio terse as compared to the band’s first four albums, but most tracks here, even those superseding four minutes, carry a nettling incompletion. “The Waiter #5,” all twinkling keys and snowflakes a’flutter, chews on wintry scenery like so many ballads of an unrequited paramour, unable to conjure enough of an arc in the composition to work past the notion that all it can be is a fraction of a longer song suite. “Places” follows, as staunchly boring and comprised of the same pieces as the song before, wracked by Pall’s warbly voice, curiously without affectation. (This solution, while buttressed by preceding explanation, can be, if one so chooses, duly ignored, because the majority of songs here are over four minutes long, and “completion” is subjective. That said, allow for murky production and shoddy mastering.)

“The Fix,” while exercising the same method as the rest of the album, pays off on the monotony of the previous nine tracks by creating a coda that actually sounds wispy, sinister, and ethereal. Singlehandedly makes the backend of the LP trump the beginning, and testifies to Tobias Nathaniel’s eclectic potential more than a list of his instrumental ephemera ever could.

Solution three) Do nothing to surprise the audience. Word; the Black Heart Procession has their schtick down to a science. We’ve already touched on the unnerving tension between vocals and muddy instrumentation, on the lyrics about love and not having love, and how that’s sad even when Love puts a “Spell” on you, and we’ve already implied the greater reliance on choppy guitar riffs and string interludes, maybe hinted at how the tropicalia of their last album is nowhere to be found, and how this signifies, to me, at least, a regression of sorts. Now we only have to look to “Tangled” to understand the rest of the blueprint. I’ll be blunt, furthering the conceptual tint of this review:

Fig. 1) All vocal cadence falls into awkward iamb: duh-duhhhhhhh-duh-duhhhhh-duh-duh, which, at the chorus, goes up a painful octave, stagnates in legato, emphasizing a melody befitting the repetition of phrases involving the image of a “web.”

Fig. 2) Guitars chug and snap, precariously balanced over the precipice of whatever amounts to post-emo. Drums, when not especially sonorous, pickle like twigs. Piano, when not in the face of fevered guitar licks, does not exist.

Fig. 3) The sentiment is one of grand heavy-handedness, as is suitable for a band sharing canonical titular choices with Led Zeppelin. As a mention of practice/advice: When releasing a single and corresponding video, up the anthemic ante, make guitar sound like an organ so as not to insult the piano, and enlist help of tasty indie actress who is still tasty but not so indie due to starring role with Josh Hartnett in movie about not ejaculating.

In other words, The Spell cannot break free of the band’s successful formula without something a lot more challenging than this. The total is nice enough, unhurried and refreshingly clear as pizzicato strings never battle with long, droll organs, and as, sometimes, simple vocal melody is strangely satisfying, as in “The Letter’s” chorus. Unruffled, pleasant unhappiness can do a PR person wonders. Unfortunately, the Procession, tightened and sparkling with renewed longevity, is still the “Black Heart Procession” and the schema of the name is still as applicable as it ever was.