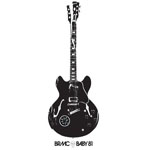 During his tenure as guitarist for the entertainingly troubled Brian Jonestown Massacre, Peter Hayes participated in the kind of mythic rock n' roll adulation that mainstream connoisseurs picked up and ran with, illogically finding refuge and inspiration in music made by frontmen whose tragedy was as predictable as the bad boy distress that preceded it. With Black Rebel Motorcycle Club, Hayes has generally cycled through the same nostalgia of the romance rock-out ("whatever happened to my rock and roll?") to the same degree as he stabbed at roots rock and blues with 2005's distinctly un-howling Howl. While BRMC have never quite been capable of emulating the spirit of a genre while creating an original album, BRMC's best moments can still be knowingly produced lightning rods of fanboy recognition.

Baby 81 thankfully drops the slapdash harmonica and slide guitar of Howl, and is really the best we can hope for barring a complete transcendence of Hayes’ formula of copy and posture. Their mild and infrequent shoegazing tendencies, their Jesus and Mary Chain volume and noise, are dusted off and made the album's real try. BRMC haven't been able to escape the impression that they've run out of stones to jump to in an already very small pond, but in the context of their seemingly blinkered attempts at finding some source of inspiration they've produced an entertainingly atmospheric, melodic record to bracing and accessible effect. They're still emulating blindly, but this emulation resonates. See the guitar solo on "Took Out a Loan," which, though appearing on a song that tends to simulate the down-on-my-luckness of whitey blues, is captured chaos and one of the few instances in which this band seems to allow itself to cut loose. Similarly, "Berlin" moves through all the usual motions, talk of being "on my knees," "suicide" and "revolution" that is thoroughly meaningless without the benefit of context, but at least bothers to inject it with the requisite danceable energy, teasingly withholding actionable verbs: "somebody's gonna mmm somebody."

Baby 81 doesn't withhold much in its opening moments. "Weapon of Choice" is more up tempo rock and noise, and though its chorus of "I won't waste it / I won't waste my love on a nation" can sound Foo Fighters at best, like that band is also adept at the guilty pleasure of pure adrenaline candy. "Windows" is then one of the band's best melodramatics in years, a spidery guitar draping bangles over percussive pianos as the song builds textures on textures for an impressive six minutes; the surprising Beatles pop of "Not What You Wanted" then takes the album in a direction that is, up until that point at least, largely unanticipated.

"All You Do Is Talk" is really the album's finest moments -- a patient, slow-building gospel ape of "Where The Streets Have No Name" that opens into one of Hayes' more appealingly personal moments. "Help yourself / don't speak," he sings, before concluding, "You're lucky words don't bleed." The massive central riff that then enters at the midway point is a combination of the band's Creation idolization with a more restrained songwriting approach or, more succinctly, everything that Take Them On, On Your Own (2003) only superficially accomplished.

Though Baby 81 features a number of single-quality songs (it's first half, really), they're all singles one might expect from a band that has generally leaned towards its most mainstream tendencies, and has found refuge in rock music's most commonly expressed sentimentalities. Some of the ideas here are still nonsensical cynicism at best and borderline sexism at worst, such as on "666 Conducer" when Hayes offers the rote "She's seventeen she's got every thing she needs / to lose." BRMC populate the same fictional city of destitute nights and cold winds as every armchair rebel and self-described disaster figure. It's a little tiresome, but the band can still manage, in its best moments, to be a bright spot in a stilted genre.