1. Your Softest Leather
2. Marie Curie
3. Password
4. Chemical Sue
5. Like A Knife
6. Aristotle
7. Plans For Earth
8. Patient Little Secret
9. Never Ever
10. The Pleasure of Sin Without Sin 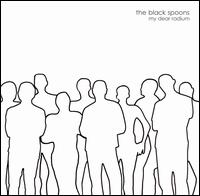 As a bored high school student, chemistry class was always the absolute worst part of my day. I would wander in, pick a seat in the back of the class and whip out my drawing pad tuning out talk of ionic bonding and the boiling point of mercury and all that. Never in all my bored musings would I have thought that chemistry class would provide anyone material for rock songs. Apparently the Black Spoons feel differently.

The Brooklyn-based trio makes science-geek poetry propelled by some infectious melodic fuzzed-out rock. I’m always intrigued when people a little to the left of normal decide to make music, and the Black Spoons' debut album, My Dear Radium, certainly fits that description. But instead of fellow weirdos like Devendra Banhart and his songs about yellow spiders or white monkeys, Radium is filled with love songs to chemical elements, a ballad about Marie Curie and an ode to leather. The songs vacillate between a lo-fi post-punk sound and a more classic rock leaning aesthetic in the later Guided By Voices mode (hey, Bob Pollard was a science teacher, right?). There is a definite '70s feel to some of the songs that recalls Bowie and T. Rex---like on album opener “Your Softest Leather," an anthemic rocker that sets the tone for an oddly charming, awkward album.

Lead singer Tom Sean apparently paid a lot more attention in chem. class than I ever did. With a delivery that falls somewhere between Marc Bolan, Lou Barlow and Jack Black, he finds a certain whacked charm in earnestly delivering lyrics that are unabashedly obsessed with chemical reactions and Three Mile Island as they are with ill-fated romances.

Album highlight “Chemical Sue,” a geeky love song about two elements forming a compound, is a joyously sharp-laced affair with descending bass lines pierced by angular post-riffs (visit their website www.theblackspoons.com to check it out). “Marie Curie” is similarly science obsessed with lyrics that recall '50s science fiction comics about weird glowing girls. I’m reminded of the only song I still like from the Stills album, “Lola Stars and Stripes,” but thankfully the Spoons aren’t quite so melodramatic.

The Black Spoons are at their best when they’re singing their weirdly romantic tales about atoms and nuclear physics; tellingly, the moments when lyrics drift into more standard confessional singer-song-writing moments, the album becomes a whole lot less interesting. Overall, though, the Black Spoons have graced us with a debut album rich with earnest geek charm that’s making me wish I had paid just a little more attention in that high school chem. class. Well, not paid attention, but at least done my homework or something. You get the idea.