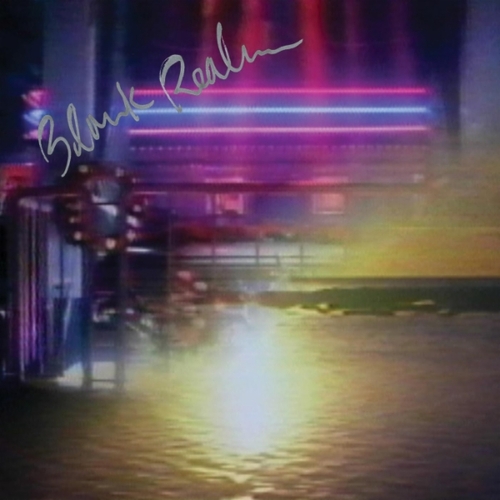 So, yeah, this record sounds a hell of a lot like Sonic Youth sometimes. Be it the labyrinthine noise-punk of opener “Acting Strange” or Sarah Spencer’s vocal invocation of Kim Gordon, there’s a distinct similarity in how Brisbane’s Blank Realm approach song structure and an emphatic yet disaffected hip-rock tonality. But there are also plenty of moments and whole songs that seem cut from a different cloth. Highlight “Cleaning Up My Mess” is entirely, fundamentally more laid-back than most things I associate with the Youth and yet has that same careful attention to detail that’s everywhere else on the record; the track takes a good minute to set everything up, simple parts—gauzy keyboards, guitar blurts, a steady drum line—that gel together seamlessly and iridescently amidst all the fuzz.

And there is plenty of fuzz to be found on Go Easy; the band revels in sounding exactly like your favorite ‘70s rock record, but somehow a modern sensibility undercuts that. Maybe it’s that in the ‘70s everything kind of sounded like rock—funk-rock, soul-rock, folk-rock, blues-rock, prog-rock, glam-rock, punk-rock, pysch-rock, kraut-rock, rock-rock, etc.—and Blank Realm condense and perfect the one-band, post-rock copy of that era. It is infinite vinyls in one, a thousand “hidden gems” re-cut and set into a piece where they can shine unified. If I heard this playing in a record store, even uninformed, I would know it was relatively current by virtue of the sharpness to its sampling of influences. And yet there is no irony or winking or really even anything anachronistic in Blank Realm’s retro-fetishism, they simply sound young, of the now, but with old souls entangled with fresher hormones and perspectives. Quite an impossible quality to define accurately in criticism but take, for instance, the title track: it could be vintage slow-jam Stones if not for a couple decades’ worth of rock music development informing some of the song’s more subtle choices in terms of production and chord progression, and the lyric describing a desire to get a car so as to be done with this “stupid shit” encapsulates a sort of casual teenage-based angst that the Stones now, of course, would have no hope of approximating.

That line has an unassuming power; Daniel Spencer’s voice on “Go Easy”—and much of Go Easy, for that matter—hovers somewhere between genial and sneering; the content of the lyrics have the feel of a simple but effective misdirect, a cunning play on nostalgia or tropes, perhaps, for motives unclear; it’s all symptomatic of a record whose ambiguous pathos validate the “Blank” in the band’s name while the expansiveness of the long-form songs, the broadness of the strokes and the crannies the band’s improvisational instincts explore, give an eagle eye on the “Realm.” Essentially, the band gives you a whole heck of a lot to take in, but they’re not gonna tell you how or try to control your focus. They just want you caught up.

So, while originality may not be high up on Blank Realm’s list of virtues, there’s something engaging about a record this wonderfully crafted and this genuine in its own personal zeitgeist. Its spirit is fresh, its energy strong and true, it is not reactive or the product of the crotchety, and yet it exists completely outside of the pandemic cultural sphere where everyone’s debating Yeezus or glibly discussing the new Miley Cyrus video and, God, that’s refreshing and even sorta life-giving. And I think Go Easy works so well on that independent level because the band comes by their independence so honestly. The rock gets pretty “arty” and genre-crossing in moments and yet never with an ounce of pretension. These guys and girl are just really good musicians with the intuitions to make really, really good music. And even if some of the character is borrowed, boy, does it feel like something gained. The aesthetics are familiar but the actual songs could be long-lost classics, not imitations of such. But, yet again, younger than that and unequivocably younger—on multiple levels—than the Youth they owe so much to. The old things will be reborn. Go easy on them, they aren’t as old/young as you think. And, it’s in this way, I think, that Blank Realm stumble onto something ageless.