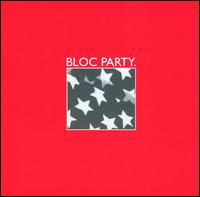 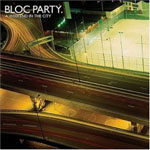 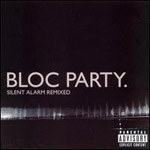 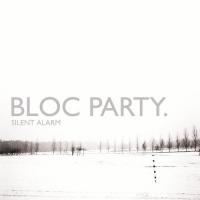 My heart says to my hands, “Take dictation.” So my spindly digits comply right promptly, knuckles crackling with the fury and the sound of music…

The hills are alive. The city’s alive. Blokes down on the corners, down in London and New York, their hips a-twist all out of sockets when they hear this. James Murphy’s changing clothes to this. The hype’s smoking, branding everyone it touches with two words: “Bloc” on the head, “Party” on the booty. Thrilling throughout every music rag and hipster lip, the early adopters have heard the silent alarm. Why, Elijah Wood and I chatted about it at the Independent Spirit Awards. Hype talk: check. Name drop: check. The word “booty”: check. Prerequisites met; review activate.

Silent Alarm needs to be recognized as pretty hot. My brain says to my heart, “Handle with caution.”

Oh, dear St. Peter, the electric guitar sirens wind down into the drum and bass and down-stroke air force take-off of “Like Eating Glass,” lifting Okereke’s classic Brit-wave vocalism above the Atlantic, words shooting in energetic repetition, a telegram from a coked chanteuse: “It’s so cold in this house / It’s so cold in this house… Like drinking poison / Like eating glass / Like drinking poison / Like eating glass.” Bloc Party’s as primitive with the riffs as it is with the words, quite clearly so on the verses of “Helicopter.” However, Lissack gussies things up with his squeaky leads, and the rhythm section post-punks six ways to Saturday, pulses of kicks and high-hats and bass notes making the Windows Media Player graphic boil lively.

“Positive Tension” has a belching robot rumble on its hook and a controlled explosion of a coda that coolly tears down suburban houses, and “Banquet” is probably at least as half as good a single as every publication and blog and mother makes it out to be. Silent Alarm powerfully jump-starts in a way that fairly announces the rest of the album. These aren’t the trappings of a one-trick pony – but, say, of a few-trick pony.

Trick #2: Marky Mark asks to slow things down a couple of octaves. With “Blue Light,” guitar strums plop into a pool of reverb, a drum ticks, vocals hold hands in harmony, and the bass and second, higher guitar line make sure that all sights are set on “pretty.” Glockenspiel and xylophone might even be chirping around in there while Okereke coos sweet nothings like “If that’s the way it is / Then that’s the way it is” and “You are the bluest light / You are the bluest light.” This routine’s later revisited on closer “Compliments” in snowy synth washes, icy cymbals and picked wires amplified into auroras.

Right after “Blue Light,” though, the Party returns to its prime, grimy strength on “She’s Hearing Voices,” groovy rock drawn to its full height and dancing up and down from tiptoes to the balls of the feet. The beat’s the engine of a clockwork mech, cogs turning and Matt Tong’s pistons pumping in the distortion of a nuclear reactor, as Lissack fires sharp beams of crimson light from his shiny axe. Then come, uh oh, the DFA-certified handclaps. With about a minute left, the vocals start croaking in a way that would surely have Timmy Taylor stomping appreciatively, making a storm-cloud dance-floor of his heavenly abode. Bloc Party only try one more time to rock like this on Silent Alarm, and the result (“Luno”) is a comparative failure.

The pony still has its third and final trick: moody mid-tempo numbers that build to emphatic conclusions, doing so in a fashion that’s weaker and more forgettable than the rest of Silent Alarm in the case of “Pioneers” and “Plans” while reaching some undeniable peaks on “This Modern Love” and “So Here We Are.” The former sound stillborn, muddy and mundane puddles left behind after the glistening, white-capped swells of the latter two, which have more body to their melodies and greater height to their emotions.

Removing the formulae and sensual stimuli from the Party leaves little that’s substantive or innovative. Even the most cursory of examinations would show the group to be an “it” band and not much else. However, Bloc Party’s absurdly good at being an “it” on Silent Alarm. They take the impersonal yet enjoyable nature of their sort of fashionable rock to a new level of excellence. Who gives a blooming wink if the first proper recourse of the elitist is backlash? Listeners have the right to…

My hands say to my heart, “Shut up now.”