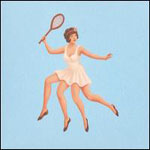 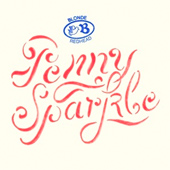 Lately Blonde Redhead have been going heavy on the bright, gentle colors, on the kind of repetitive emptiness candied and scrubbed clean by a sure hand and some swooning production. It’s beautiful, sure, though never much more than a pleasant, rococo muzak: endless loops for boutique vintage stores.

Still, to deny the power of Kazu Makino and the Pace brothers’ simple, lush pop—the same simple, lush pop they’ve been making for years—is to deny the simple pleasures such familiarity can afford. Chief among these is “Will There Be Stars,” whose tight, murmured chorus makes previous high-water marks like “Elephant Woman,” from Misery is a Butterfly (2004), sound tentative and slightly disjointed. The big, neo-‘80s tom toms and echoing washes of synth are groovier and more refined than anything Blonde Redhead have done before, the simple title refrain more eerily ambiguous, and in turn more vaguely fascinating, than earlier sentiments of, say, “misery is a butterfly.”

Other than that, Penny Sparkle has no standout tracks and no big artistic leaps forward, but the articulation of “I don’t mean to flatter you” on “Spain” and the male/female halving of “Black Guitar” are quietly striking moments, the perfect demonstration of the careful increments the band works within.

These increments—shifting their production into cavernous, uncluttered arrangements; refining their shiny pop into something subtler—are easy to ignore, especially at a time when bands who do not offer clear maturity are easily discarded. But the approach here—that on songs like the title track one can pair a rambling, breathy vocal with easy listening electronics and top it off with a wash of shoegaze noise and a song-defining guitar line (somehow mixed lower than the “Wuthering Heights” solo)—is dependable, refreshing, and sometimes remarkable. So even if the sorts of pleasures that Penny Sparkle provides are out of fashion, they remain worthwhile.

When the songs do get louder, they are as precisely calibrated towards some hypothetical wine & cheese set as any Taylor Swift song is towards a teenage girl—there is not even the slightest intimation towards a blog trend or college-radio hit to be found. And yet, could they, by expanding their palette into something more $ustainable than the shoegaze/baroque dichotomy of their past few albums, retreat from obvious engagement, able to tantalize more than if they had done a collaboration with—oh, I dunno—Danger Mouse?

Subtlety aside, when they do get loud, it’s a hazy and near-epic loud, like the opening duo of “Here Sometimes” and “Not Getting There,” the kind of loud which eschews the increasingly propulsive (albeit expected) arpeggios of Butterfly and 23 (2007) for bigger chords and riskier payoffs. At their best are songs like “Will There Be Stars” or “Oslo,” which take Blonde Redhead’s new independence from pretty, though interchangeable, cascades of notes toward slightly new innovations like guitar upstrokes or discursive drums. Then we’re handed songs like the all-too-accurately titled “My Plants Are Dead” or “Love or Prison,” which drift off without the clear underpinnings of brief melodies that rooted their past successes.

In either case, one gets the feeling that every success or failure for the band is rooted in a series of musical decisions based on nothing more than an unflashy evolution, both natural and considered, from forms last evidenced on the album before. Instead of being doomed to tread a certain set of glossy, shoegaze-littered paths, and in that doom come off desperate to change, they search within their well-worn sound for a collection of songs with no aspirations to be anything more than the best at what they are. Now that’s some progress.