Other Records by Blood Brothers 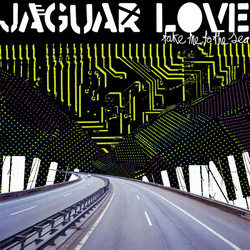 Jaguar Love: Take Me to the Sea 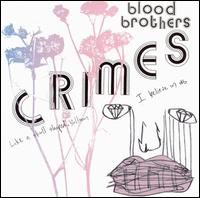 The Blood Brothers say it best on Crimes’ final track: “everybody needs a little devastation.” It’s true. I’d say without hesitation that a good portion of my record collection consists of British artists who could be described as “limp-wristed,” but even I need my face ripped off from time to time. Up until Crimes’ release last week, Mclusky's The Difference Between You and Me... (and in particular "Falco vs. the Young Canoeist") held 2004's face-ripper spot. But the latest from the riotous Welsh trio has been overtaken by the new Blood Brothers disc, if only because as skull-crushingly fun as Mclusky can be, I would never go as far to call them “disturbing,” something which The Blood Brothers most certainly are.

If you want to pigeonhole The Blood Brothers, you call them a guitar-heavy hardcore outfit that---while certainly being loud and fast---is unafraid to expand the genre via the inclusion of such uncommon traits like Wurlitzer Electric Piano, laptop beats, and ballad tempos (horrendous late-90’s Bad Religion notwithstanding). But such a description discounts the contributions of co-frontmen Jordan Billie and Johnny Whitney, who like to scream. A lot. Billie is the (ever so slightly) more human sounding of the two, usually favoring a snarling lower register, but Whitney's howls better typify what this band is about---constantly emoting in an otherworldly shriek perhaps reminiscent of Mike Patton getting his fingernails ripped off, or at his funkier moments, James Brown on a PCP binge.

It’s a downright scary sound for the uninitiated; my roommate, self-proclaimed lover of ‘heavy’ music, would shut his door and cry like an infant whenever I blasted tracks from 2002’s Burn, Piano Island, Burn! on the stereo. The closest cousin that Crimes has to an “Ambulance vs. Ambulance”-style anthem is in first "single" “Trash Flavored Trash,” a characteristic rant featuring typical requests to be “taken to the pit of celebrity pregnancies” and “wear the skin of magazine babies” held together by an awesome Joe Lally-style bassline and ferocious drum work. "TFT" demonstrates that, for all their vocal histrionics and bloody lyrical imagery, The Blood Brothers are nothing if not musically tight.

“Trash Flavored Trash” is immediately followed by “Love Rhymes With Hideous Car Wreck,” (someone’s been taking classes at the Mclusky school of song titling!) a significantly quieter track that weaves the tender tale of a guy who leavs his normal girlfriend for a chick with "fake porno tits," only to end up the victim of the title's hideous car wreck. And the jilter lover? “He talked her out of her skirt in his beer-soaked apartment / And then they did all the things you never said that you wanted / And the sirens are laughing underneath your skull.” The aforementioned phrases are absolutely shrieked at top volume alongside horror movie riffs. Never has Xiu Xiu’s Jamie Stewart appeared as cuddly as the cat on his last album cover.

But for all the impressive detail that goes into the Blood Brothers’ lyrics, they often end up being a moot point as the howling renders them impossible to understand without the liner notes. The musical accompaniment does an admirable job of picking up the slack. “Peacock Skeleton With Crooked Feathers” is inventive in that it hardly employs any guitars at all, relying instead on a continuous Wurlitzer riff and the kind of tribal drumming usually associated with the Mars Volta (not to mention a strange howl that may or may not actually be a sampled peacock). With its combination of roughly four disparate parts stitched together, “Rats and Rats and Rats for Candy” would have sounded at home on the first Mr. Bungle album, and were were you to erase Whitney's relatively restrained cries of “scarecrow, you ruined me, ” “Live at the Apocalypse Cabaret” is easily the most uncharacteristic track here: a finger snappin' Fiona Apple-type piano ditty. But lest anyone believe that The Blood Brothers are getting a we bit out of touch with their masculine side, the fact that three-quarters of the record is a guitar-intensive scream-fest should reassure most fans.

I’m not exactly sure who constitutes The Blood Brothers’ fanbase, and because I’m admittedly too scared to attend one of their gigs, I’m not about to find out. But most indie publications seem to dig them, and seeing as Crimes was released on V2, I assume that they sell a decent amount of records. A copy of Crimes can serve several purposes, some of which include driving parental figures up the wall, or scaring the crap out of jocks who’d like to think At The Drive-In is “like, the heaviest shit ever.” There's no question that Crimes was not designed with mass consumption in mind. But in terms of a go-to disc for a pissed off stomp around the bedroom, it’s the finest album I’ve heard this year.