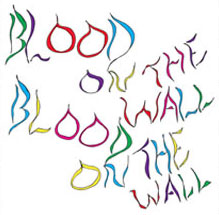 Blood on the Wall

Typically, an album like this gets hailed as a return to the “aw shit, let’s drink some booze and rock out” roots of rock’n’roll. A typical review will celebrate the drinking of alcohol and the smashing of things and the obligatory revelry of general fucked-upedness and mandatory Stooges references. But, thankfully, Blood on the Walls has a little more going for them than the typical rock revitalists.

Oh, Ben and Courtney Shanks, the brother and sister duo that make up BOTW, certainly have plenty of sneer, drink plenty of alcohol and I’m sure they've even, at some point, smashed things. But there’s more here than simply making a racket and nodding to any one era, Awesomer plays more like a love letter to the trashy chic of the last thirty years of East Village rock. Their sound is equal parts Richard Hell and Voidoids, early Pixies, grimy Sonic Youth and early Yo La Tengo. There’s plenty of noise, but they have a fine understanding of the pop craft that went into the glorious noise their forebearers made.

Ben and Courtney alternate turns at the mic, perhaps lending to the stylistic virtuosity the band demonstrates, with Ben channeling the nasally whine of a young Frank Black and Courtney deadpanning bored indie chick chic, sounding a bit like Alan Vega at times. Nonetheless, the dirty guitar, chunky bass and love of filth hold the songs together nicely, and the alternating vocals keep the listener guessing. Perhaps it’s my deep and irrational love of all things Pixies, but Ben’s songs just seem a little more dynamic and less repetitive. His best, the insanely catchy “Reunite On Ice” is a filthy cocktail of helicopter-whopping guitar and detuned bass. It’s followed by a Courtney’s no-wave gem “Heat From the Day” that pulses with a meaty Cramps bass-line.

Elsewhere, Ben shines again on the surf-rock on speed of “Gone.” Courtney’s “I’d Like to Take You Out Tonight” plays like an updated version of Suicide’s “Cheree,” a herion-spiked love letter. Ben’s guitar work throughout is impressive, lending some traditional song structures an added edge and grit. If band’s sound could be said to be indebted to the past, Ben’s guitar is the aspect that breaks free the most, keeping a cohesive, jumpy feel that holds the music together. His angry attack on “Can You Hear Me” is one such example.

Much of Blood on the Wall’s second record is indeed obsessed with a bygone era, but they attack their idols with an enthusiasm and fire that keeps things interesting, giving a shot in the arm to some heavily trod-upon territory. And it’s not like they’re recycling Joy Division and Gang of Four riffs like everyone else these days either; if anything it’s refreshing to see someone looking back to bands like Suicide, Yo La Tengo, the Cramps and the Voidoids in addition to the old standbys of the Youthies and Pixies. When Blood on the Wall do get their shit together in certain spots on this album, they are a fearsome beast, a testament to the highs of “pure” rock. Now if only they could do it a little more often.