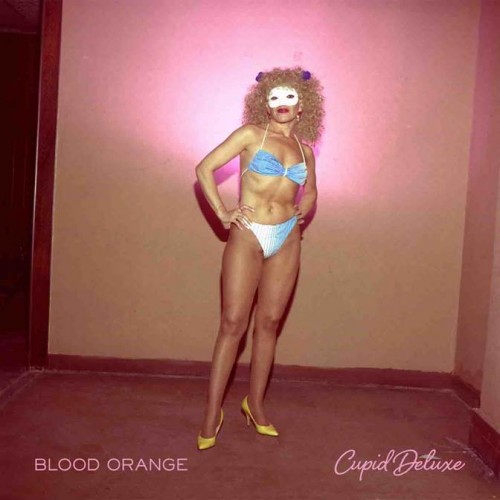 In its most finely wrought form, melodrama elevates unflattering feelings—teenage stuff, the messy adolescent sludge of yearning, heartbreak, unspoken desires—to something more respectable by lending them the better light of a cinematic, big budget sheen. The strongest musical example in recent memory is M83’s Hurry Up, We’re Dreaming (2011), a double LP’s worth of Technicolor-bright, heartracing melodrama seemingly repulsed by the idea of emotional nuance, and all the better for it. But on the white gold throne where M83’s Anthony Gonzalez once basked in a deep v and sparkly Euro jeans, a new reigning king of masterful pop melodrama sits: raise a glass of pinot grigio to Blood Orange and his Cupid Deluxe, for he has risen, indeed.

Dev Hynes, the producer and songwriter behind Blood Orange, works like the musical equivalent of a power sander. Dude touches it, and it gets real smooth. Coming off of co-writing and co-producing Sky Ferreira’s “Everything is Embarrassing,” Hynes expands his melancholy pop palette just slightly enough on Cupid Deluxe to create an album at once slickly cohesive and subtly textured. Opener “Chamakay” puts the record’s best velvet-slippered foot forward, a stunning slice of R&B pop that glides along an almost unbearable sense of yearning. Caroline Polachek duets with Hynes on the track, her vocals almost unrecognizably soulful when compared to her main gig as Chairlift’s studio-glossed chanteuse, all wordless cooing and impassioned harmonies, a perfect counterpoint to Hynes’s breathy restraint. “I’ll never trust you if you’re thinking that it’s just a game,” the two croon to each other; it’s pop universalism at its best, a lyric endlessly evocative as a direct result of its banality. “Chamakay” is the type of song to make you want to apply for a second Bachelor’s degree, if only so it can soundtrack your college nights and their wine-purple feelings this time around.

Elsewhere, Hynes cribs from the other end of the R&B spectrum, upping the tempo to add disco stutter to the light funk of “You’re Not Good Enough” and “Uncle ACE,” back-to-back dance floor jams whose intuitive rhythms and widescreen hooks belie the queasiness in the songs’ stories of emotional distance. Hynes’s staccato guitar strut adds a tone of confidence to this material, these sensitive songs that could otherwise be dismissed by some as toothless, navel-gazing new wave revivalism. It’s the same trick pulled by his similarly minded comrade-in-acid-washed-arms George Lewis, Jr., in Twin Shadow, a seductively hazy sexuality that borrows equally from modes of aggression and submission. In other words, the guy listens to Prince, too.

But unlike the Purple One, Hynes’s greatest compositional strength proves itself in his willingness to share the spotlight. He leaves the bass licks to David Ginyard, who rightfully dominates many of these songs with his deep, fluid tone. Verses by Queens’s Despot and London’s Skepta serve as welcome changes of pace as the centerpieces of “Clipped On” and “High Street,” respectively, and both rappers contribute entertaining rhymes that miraculously never distract from the record’s overall fixation on earnestness, with Skepta’s verse in particular serving up a disarming show of starry-eyed hopefulness in its story of the rapper’s early days.

Hynes’s curatorial ear fails him on occasion, most glaringly in his lending an invitation to Dave Longstreth to sing along on “No Right Thing.” Longstreth and Hynes share a similar vocal range, but putting the Dirty Projectors vocalist next to Hynes on a track only highlights the most annoying idiosyncrasies in Longstreth’s vocals, all nasal syllables and haughty vibrato. At the very least, choosing a guest with a register more distinct from Hynes’s would’ve kept the track from being one of the album’s only skippable moments. Still, as a whole, Cupid Deluxe offers a remarkable rush of unfiltered joy—a lovelorn melancholy made positively inviting by Hynes’s refusal to shoot for the cool, instead allowing himself to indulge in melody and feelings splattered across a canvas as big as an IMAX screen. “Chosen,” the seven-minute suite at the record’s heart, begins with a French-accented monologue about love at first sight and melts into something like the musical equivalent of that feeling a few minutes later. If you haven’t felt that in a long time, Cupid Deluxe may be the next best thing.